EUR/USD Drops After US Services Data, Attempts to Recover

EUR/USD is trading lower today as the positive reports about US services sector bolstered the dollar against the euro. Yet as of now, the currency pair is trying to recover as not all of the US data was good. The trade balance, for example, worsened more than analysts had predicted.
Trade balance deficit was $47.1 billion in February, up $1.2 billion from $45.9 billion in January, revised. That is compared to the median forecast of $46.3 billion. (Event A on the chart.)
Final Markit services PMI rose to 51.3 in March up from 49.7 in February while analysts had predicted it to be the same as the flash reading of 51.0. (Event B on the chart.)
ISM services PMI was at 54.5% in March, higher than the February value of 53.4% and the consensus forecast of 54.1%. (Event C on the chart.)
Yesterday, a report on factory orders was released, showing a drop by 1.7% which was bigger than the 1.5% fall predicted by analysts. The indicator was up 1.2% in the preceding month. (Not shown on the chart.) 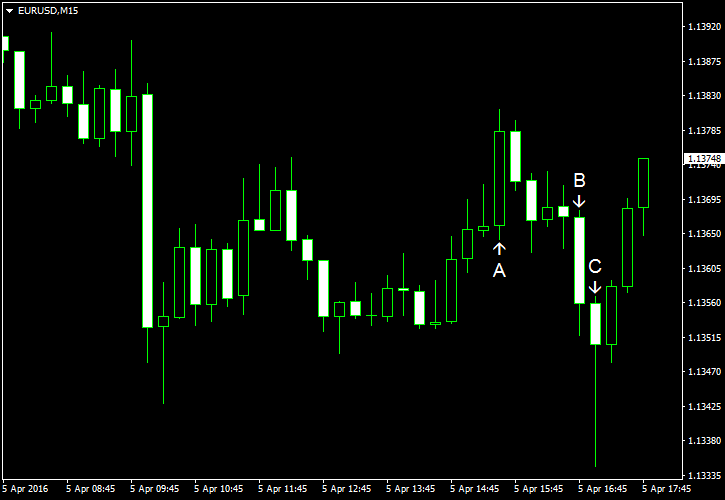