EUR/USD was falling in the first half of the current trading session but bounced in the second. The dollar made an attempt to bounce against the euro after the release of Federal Reserve’s latest policy meeting. Yet the greenback was unable to follow through with a rally, trading largely sideways.
US crude oil inventories fell by 4.9 million barrels last week after rising by 2.3 million the week before. Experts had predicted an increase by 3.1 million. Total motor gasoline inventories rose by 1.4 million. (Event A on the chart.)
FOMC minutes (event B on the chart) revealed that several of the Committee members thought that it may be possible to raise interest rates at the next meeting:

Some other participants indicated that an increase in the target range at the Committee’s next meeting might well be warranted if the incoming economic data remained consistent with their expectations for moderate growth in output, further strengthening of the labor market, and inflation rising to 2 percent over the medium term.

In fact, some argued in favor of raising rate at the March meeting:

A couple of participants, however, saw an increase in the target range to 1/2 to 3/4 percent as appropriate at this meeting. 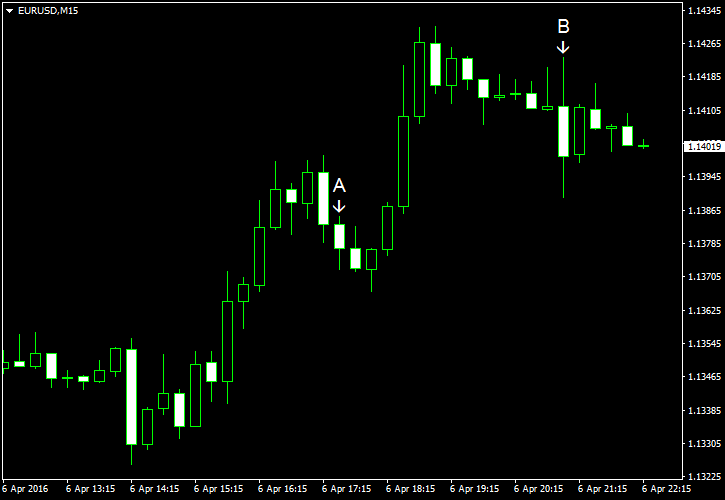