Dollar Falls Against Euro But Not Far

The dollar fell against the euro today as US economic data was not particularly good. The drop was not big though. Falling crude oil prices were also weighing on the greenback.
NY Empire State Index climbed from 0.6 to 9.6 in April, far above the median forecast of 2.1. It is the highest level in more than a year. (Event A on the chart.)
Industrial production and capacity utilization fell in March. Furthermore, both indicators received negative revisions for their February readings. Production was down 0.6% after declining at the same rate in February. The analysts’ average estimate promised just a 0.1% drop. Capacity utilization rate decreased from 75.3% to 74.8% last month, below the consensus forecast of 75.4%. (Event B on the chart.)
Michigan Sentiment Index edged down a bit from 91.0 in March to 89.7 in April according to the preliminary estimate. Specialists had predicted an increase to 91.9. (Event C on the chart.)
Net foreign purchases were at $72.0 billion in February. It was a better reading than $32.2 billion predicted by experts and the previous month’s -$11.9 billion. (Event D on the chart.) 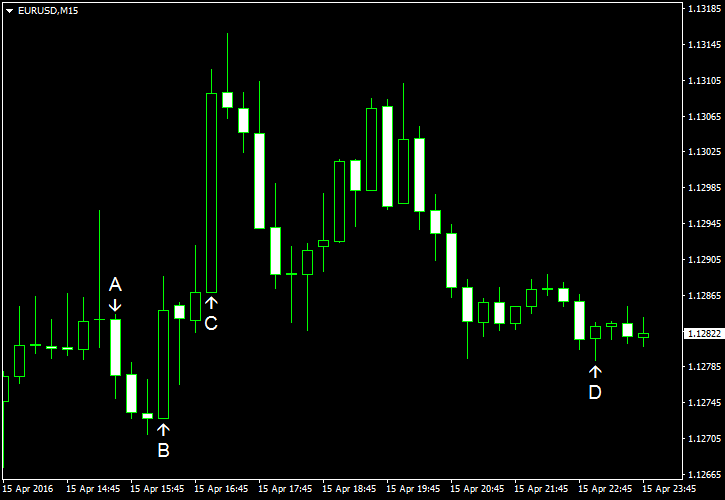