EUR/USD Goes Down After Three Sessions of Gains

EUR/USD fell for the first day in four during Wednesday’s trading. Prospects for monetary easing loom over the euro, liming the attractiveness of the currency to investors. Most analysts do not expect for the European Central Bank make a move during tomorrow’s meeting, but comments from ECB officials may hurt the euro all the same. Meanwhile, the dollar found support from the positive housing data, which followed yesterday’s negative report.
Existing home sales rose to the seasonally adjusted annual rate of 5.33 million in March from the downwardly revised 5.07 million in February. The median forecast pointed at 5.29 million as a possible rate. (Event A on the chart.)
Crude oil inventories rose by 2.1 million barrels last week, in line with analysts’ expectations. The stockpiles swelled by 6.6 million the week before. Total motor gasoline inventories fell just a little bit by 0.1 million barrels.(Event B on the chart.)
Yesterday, a report on housing start and building permits was released, showing a decline of both indicators. Housing starts fell to the seasonally adjusted annual rate of 1.09 million in March from the Februaryâs 1.19 million. Building permits dropped to the same rate from 1.18 million in February. (Not shown on the chart.) 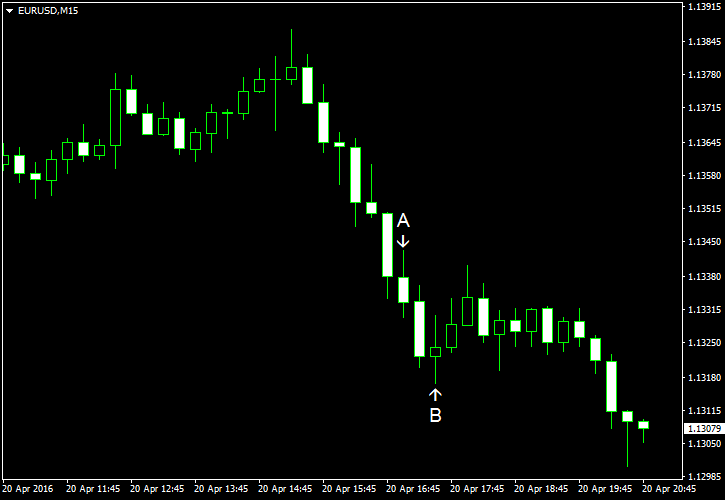