EUR/USD fared quite well today and has rallied strongly following a series of macroeconomic reports coming out of the United States. Nearly all indicators have disappointed the dollar bulls, adding strength to the euro attack against the greenback.
Durable goods orders added only 0.8% in March according to the preliminary report by the US Census Bureau. That was much better than the last month’s drop by 3.1% but considerably worse than the median forecast of 1.5% increase. (Event A on the chart.)
S&P/ home price index rose by 5.4% on  basis in February. The growth follows 5.7% gain in January and is comparable to 5.5% forecast by the analysts. (Event B on the chart.)
Markit services PMI flash report has shown a growth to 52.1 in April. It went up from 51.3 (revised positively from 51.0) that had been reported for March. It is a bit lower than the median forecast of 52.3. (Event C on the chart.)
Consumer confidence tanked in April, going down from 96.1 to 94.2. A moderate decline to 95.8 had been anticipated by the traders. (Event D on the chart.)
On Friday, Markit manufacturing PMI flash report demonstrated a decline from 51.5 to 50.8 in April. It was significantly worse than the prevailing forecast of 52.0. (Not shown on the chart.)
Yesterday, a new home sales report has shown a slight drop from 512k to 511k in March (seasonally adjusted annual rate.) A growth to 520k had been expected. (Not shown on the chart.) 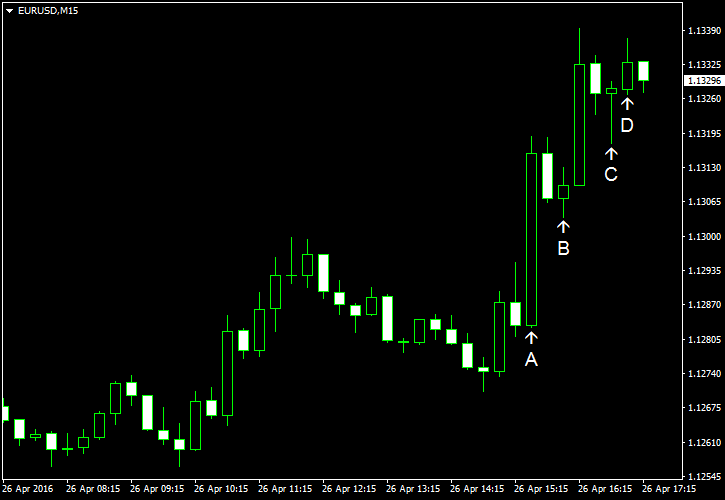