The main theme of Wednesday’s trading session was the monetary policy announcement from the Federal Reserve. The Fed offered no surprises, holding its policy steady and giving no particular hints about its plans for the future. EUR/USD was very volatile immediately after the event but steadied quickly and moved mostly sideways afterwards, though with an upward bias.
Pending home sales rose 1.4% in March from the downwardly revised February level after increasing 3.4% in the previous reporting period. The actual gain was far bigger than 0.3% predicted by analysts. (Event A on the chart.)
US crude oil inventories gained by 2.0 million barrels last week, demonstrating almost the same rate of growth as in the week before. The median forecast promised a bit smaller growth by 1.4 million. Total motor gasoline inventories increased by 1.6 million barrels. (Event B on the chart.)
FOMC made no changes to its monetary policy, meeting market expectations. (Event C on the chart.) The Committee dropped the important part about global risks from its statement, though it mentioned that global developments remain among things to consider in making decisions regarding the monetary policy. Overall, the mood of the statement looked positive. Nevertheless, FOMC reiterated that it expects only gradual pace for monetary tightening: 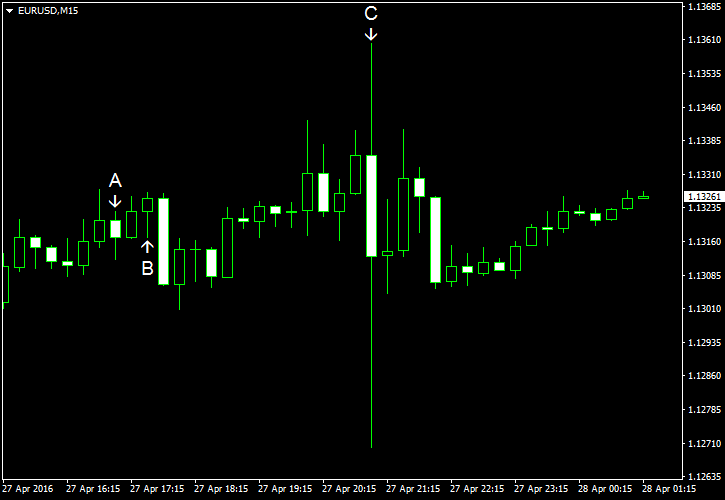