EUR/USD Goes Down After ECB

EUR/USD dropped after the European Central Bank conducted a policy meeting today. ECB President Mario Draghi tried to avoid any shocks, making rather neutral comments. (Event B on the chart.) Yet the outlook for the European economy remained fairly pessimistic, giving incentive for traders to sell the euro. As for US economic data, it was rather solid today, without any big surprises.
ADP employment rose by 173k in May, in line with market expectations, after increasing 166k in April (positively revised from 156k). (Event A on the chart.)
Seasonally adjusted initial jobless claims were at 267k last week, barely changed from 268k the week before. That is compared to the forecast value of 270k. (Event B on the chart.)
Crude oil inventories shrank by 1.4 million barrels last week but remained near historically high levels for this time of year. Analysts had predicted a drop by 2.7 million barrels, and the stockpiles were down 4.2 million the week before. Total motor gasoline inventories were down 1.5 million barrel, yet were still above the upper limit of the average range. (Event C on the chart.) 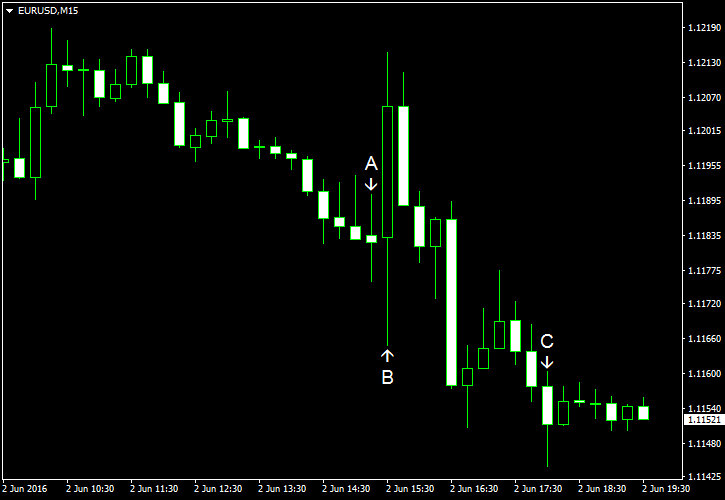