EUR/USD Up 1.6% After NFP Shock Market

EUR/USD surged today after the release of US nonfarm payrolls. The data was not just worse than expected, it was simply awful, showing the smallest employment growth since the late 2010. Most other indicators released during the trading session were not that bad, but they were overshadowed by the abysmal report. As a result of that, the dollar was weak not just against the euro but versus other currencies as well.
Nonfarm payrolls demonstrated just a marginal increase by 38k in May, far off analysts’ forecasts of 159k. On top of that, the April’s reading was revised from 160k down to 123k. At the same time, unemployment rate edged down from 5.0% to 4.7%, compared to the forecast value of 4.9%. Average hourly earnings rose 0.2%, matching predictions, after increasing 0.4% in April (revised from 0.3%). (Event A on the chart.)
Trade balance deficit widened to $37.4 billion in April up from $35.5 billion in March. It was still smaller than $41.2 billion predicted by experts. (Event A on the chart.)
Markit services PMI fell from 52.8 in April to 51.3 in May according to the final revision. It was in line with the preliminary reading and the analysts’ forecast of 51.2. (Event B on the chart.)
ISM services PMI slid from 55.7% to 52.9% last month, falling far below the 55.4% level promised by specialists. (Event C on the chart.)
Factory orders rose 1.9% in April, very close the predicted rate of 1.8%. The March’s advance was revised from 1.1% to 1.5%. (Event C on the chart.) 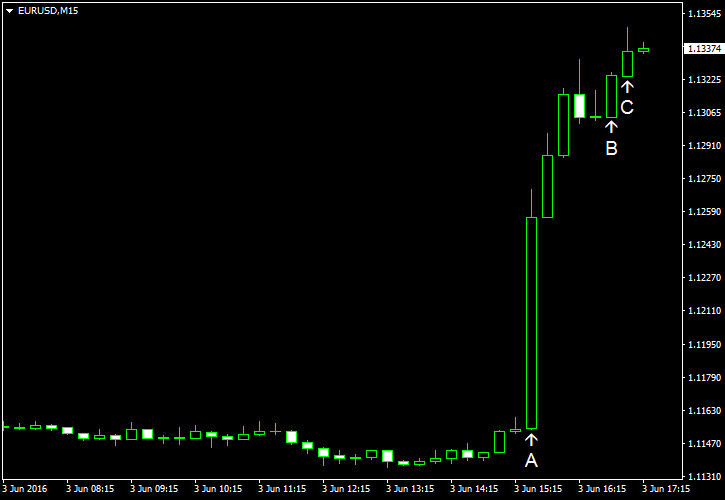