EUR/USD surged today after the Federal Open Market Committee left its monetary policy unchanged and lowered its economic expectations. Of the particular note was the forecast for interest rates that was also cut. It showed a smaller number of interest rate hikes in 2017 and 2018. Furthermore, chances for a rate increase in summer have basically evaporated. Unsurprisingly, the dollar fell against its rivals after the news, though the drop was not spectacular.
PPI rose 0.4% in May. That is compared to the predicted rise of 0.3% and the 0.2% gain in April. (Event A on the chart.)
NY Empire State Index climbed from -9.0 in May to 6.0 in June. It was an unexpectedly good reading considering that analysts had predicted an increase to just -3.4. (Event A on the chart.)
Both industrial production and capacity utilization fell below analysts’ projections in May. Industrial production dropped 0.4% versus the forecast decline of 0.2% and the April’s gain of 0.6%. Capacity utilization decreased from 75.3% to 74.9% while experts had predicted just a marginal fall to 75.2%. (Event B on the chart.)
US crude oil inventories were down 0.9 million barrels last week. It was the fourth straight week of decline, but the stockpiles remained at historically high levels for this time of year. Total motor gasoline inventories dropped 2.6 million barrels last week but remained well above the upper limit of the average range. (Event C on the chart.)
FOMC lefts its monetary policy unchanged. The statement reiterated that interest rates will be raised gradually:

The Committee actually lowered the projected path of the federal funds rate. (Event D on the chart.)
Net foreign purchases were at -$79.6 billion in April compared to the March’s value of $78.1 billion. The average forecast promised a reading of $30.2 billion. (Event E on the chart.) 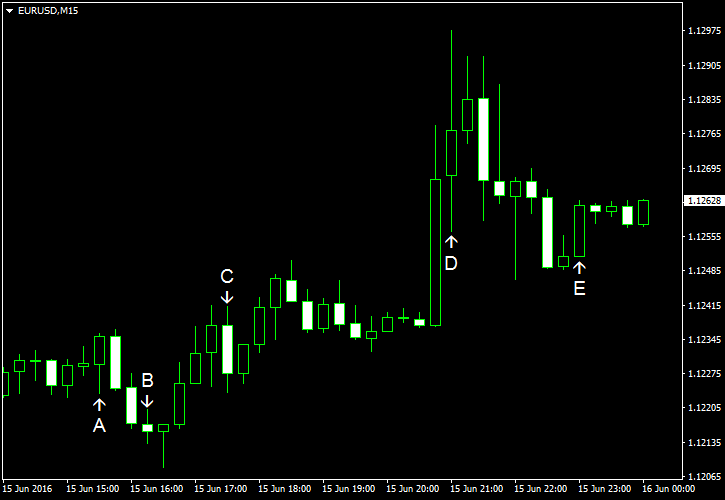