EUR/USD Backs Off from Daily Highs, Remains Above Opening

EUR/USD rallied today as Britons were voting whether to stay in the European Union or leave it. Polls were showing that there were more people preferring to remain in the Union than to leave it. This gave boost to European currencies, limiting demand for safe currencies (like the dollar). US economic data, which was poor for the most part, was not helping the greenback either. The currency pair backed off from the daily highs but as of now it still trades above the opening level.
Initial jobless claims dropped from 277k to 259k last week, far below the 271k level predicted by analysts. (Event A on the chart.)
Flash Markit manufacturing PMI rose from 50.7 in May to 51.4 in June instead of falling to 50.5 as experts had forecast. (Event B on the chart.)
New home sales were at the seasonally adjusted annual rate of 551k in May. The reading was not only below the previous month’s value of 586k (which itself received a negative revision from 619k) but also missed economists’ expectations of 561k. (Event C on the chart.)
Leading indicators fell 0.2% in May while specialists had promised an increase at the same rate. The indicators were up 0.6% in April. (Event C on the chart.) 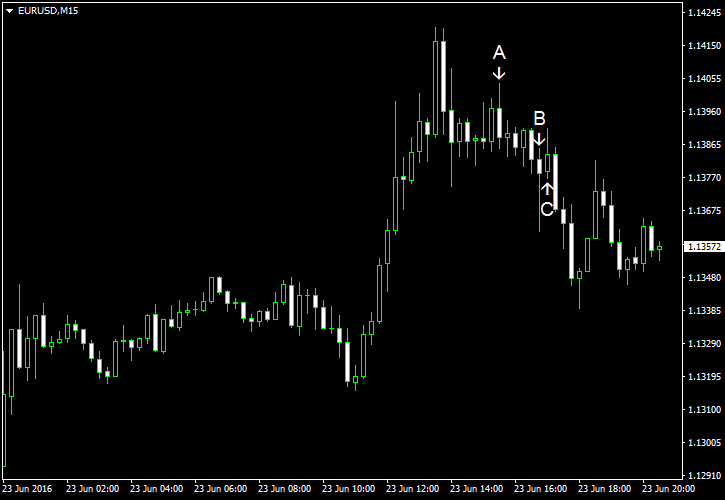