EUR/USD rose for the third consecutive day during the current trading session, though the rally was nowhere near being enough to erase the Friday’s huge drop. Markets continue to calm down as they digest the result of Britain’s referendum. While market participants feel less anxious, the future remains uncertain, and that may cause traders to stick to safe currencies. The problem for the dollar is that it has lost its appeal due to the extremely low probability of an interest rate hike from the Federal Reserve this year. In fact, some market commentators were even talking about possibility of a cut. Such view reduces the attractiveness of the US currency to investors.
Personal income rose 0.2% in May, a bit less than analysts had predicted (0.3%). Personal spending was up 0.4%, matching forecasts exactly. Both income and spending received a positive revision for April, adding 0.1 percentage point, resulting in an increase by 0.5% and 1.1% respectively. (Event A on the chart.)
Pending home sales sank 3.7% in May, far more than experts had estimated ahead of the report — 0.9%. Additionally, the April’s increase got a negative revision from 5.1% to 3.9%. (Event B on the chart.)
US crude oil inventories shrank by 4.1 million barrels last week compared to a drop by 2.3 million predicted by specialists and the 0.9 million decrease logged the week before. Nevertheless, the stockpiles remained at historically high levels for this time of year. Total motor gasoline inventories were up 1.4 million barrels. (Event C on the chart.) 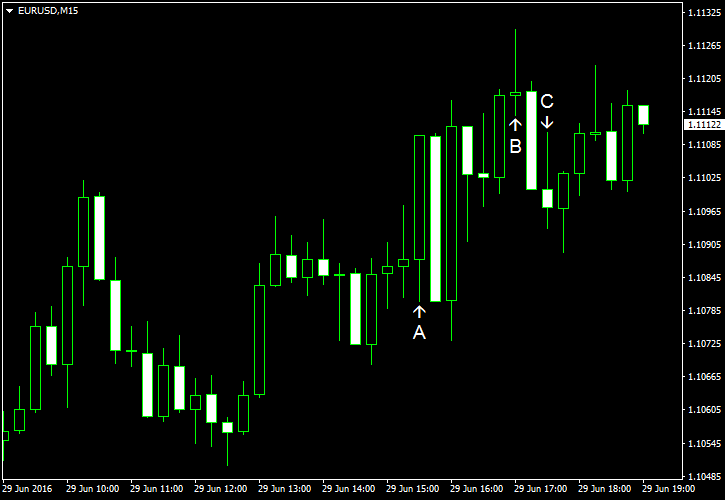