EUR/USD rallied today, hitting the highest level since the big slump that had followed the Brexit announcement. US economic data released during the current trading session was mixed. The same goes to remarks from Federal Reserve officials as New York Fed President William Dudley said that a September interest rate hike is still possible while yesterday’s remarks from San Francisco Fed Governor John Williams were very dovish.
CPI was unchanged in July after rising 0.2% in June, in line with analysts’ expectations. (Event A on the chart.)
Housing starts were at the seasonally adjusted annual rate of 1.21 million in July, up from 1.19 million in June and above the analysts’ median projection of 1.18 million. Building permits were at the seasonally adjusted rate of 1.15 million, the same as in the previous month and close to the consensus forecast of 1.16 million. (Event A on the chart.)
Both industrial production and capacity utilization improved in July. Industrial production was up 0.7%, compared to the predicted rate of growth of 0.2% and the June’s revised 0.4% (0.6% before the revision). Capacity utilization rate increased from 75.4% to 75.9%, exceeding the predicted value of 75.7%. (Event B on the chart.)
Yesterday, a couple of reports were released (not shown on the chart):
NY Empire State Index fell from 0.6 to -4.2 in August, falling below the reading of 2.1 predicted by experts.
Net foreign purchases were at -$3.6 billion in June, far below the previous month’s positive value of $40.8 billion and the predicted figure of $42.3 billion. 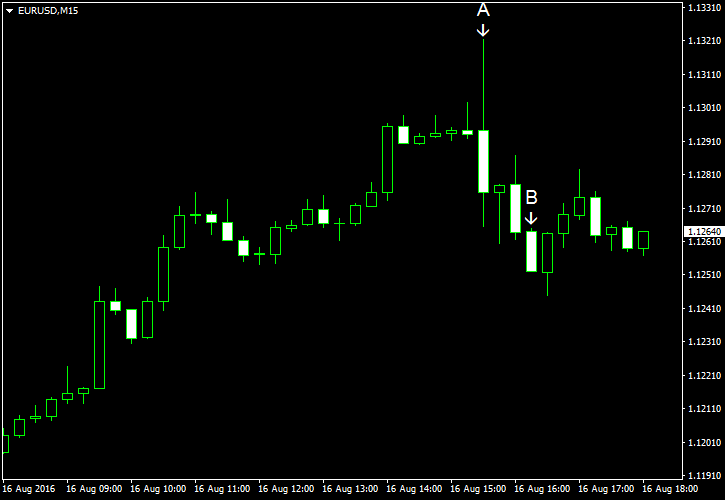