Both June and July meetings have been disappointments to dollar bulls. The FOMC played its game. It was, of course, expected by the savvy market observers. The real question now is whether we see a higher interest rate in the USA by the end of the year?
Market sentiment
The most important sentiment indicator for the future federal funds rate assessment is the CME FedWatch Tool, which is based on actual interest rate futures prices and is supported by the traders who are willing to buy and sell those futures. According to it, there is a 15% chance of an interest rate hike in September:
CME FedWatch Tool
For November, the tool expects higher rates with 22.0% probability — 20.8% of a 25 basis points hike and 1.2% of a 50 basis points hike:
CME FedWatch Tool
For December, things get even more complicated: 48.1% for 25 basis points, 10.6% for 50 basis points, and 0.6% for 75 basis points. Thus, the total probability of an interest rate this year is 59.2% according to CME futures prices:
CME FedWatch Tool
Of course, those are just probabilities and anything might happen. Economic Forecast Survey of a group of 60+ economists conducted by the Wall Street Journal this month has shown that just 13.1% of them expect the first rate hike in September, 1.6% see FOMC aiming for November, and 73.8% believe it will be December. The remaining 11.5% are forecasting the next interest rate shift for 2017. As you can see, it is significantly different from the  probabilities — a somewhat lower chance for a rate hike on September 21 and a much higher chance for a rate hike by the end of this year.
Speeches
The period after the July FOMC meeting was full of speeches delivered by various Fed officials. However, only few of them had any influence on the markets. From what has been said, it is evident that the Brexit and other external shocks are out of the way and are no longer considered a concern for further rate increases. The essential speeches given by the voting FOMC members since July 27 are presented below.
On July 31, William C. Dudley (President of the NY Fed) spoke at Bank Indonesia about The U.S. Economic Outlook and the Implications for Monetary Policy. His tone was rather dovish:

All three of these reasonsâevidence that U.S. monetary policy is currently only moderately accommodative, the fact that U.S. financial conditions have been influenced by economic and financial market developments abroad, and risk management considerationsâargue, at the moment, for caution in raising U.S. interest rates. So, directionally, the movement in investor expectations towards a flatter path for U.S. interest rates seems broadly appropriate.

On August 17, James Bullard (President of the St. Louis Fed) delivered a speech at the Wealth and Asset Management Research Conference at the Olin Business School at Washington University in St. Louis. He discussed two narratives via a complex presentation of the new approach to monetary policy. I consider it kind of dovish. The new narrative that Bullard spoke of justifies a prolonged period of lower interest rates based on the range of regimes, in which the economy is operating according to Fed’s analysis. His projections for the next 2.5 years based on this new approach are not very optimistic:

The target federal funds rate (i.e., the policy rate) is projected to be 0.63 percent over the forecast horizon.

On August 21, Vice Chairman Stanley Fischer shared his Remarks on the U.S. Economy at the Program on the World Economy conference sponsored by The Aspen Institute. His speech can be considered hawkish, stating that the Fed is close to its targets and dismissing the external factors:

So we are close to our targets. Not only that, the behavior of employment has been remarkably resilient. During the past two years we have been concerned at various stages by the possible negative effects on the U.S. economy of the Greek debt crisis, by the 20 percent appreciation of the  dollar, by the Chinese growth slowdown and accompanying exchange rate uncertainties, by the financial market turbulence during the first six weeks of this year, by the dismaying pothole in job growth this May, and by Brexit–among other shocks.

On August 26, Chair Janet L. Yellen spoke at Designing Resilient Monetary Policy Frameworks for the Future symposium in Jackson Hole, Wyoming. The topic of her speech — The Federal Reserve’s Monetary Policy Toolkit: Past, Present, and Future — was very broad, but there were three main points for the Fed watchers in it:

…our decisions always depend on the degree to which incoming data continues to confirm the Committee’s outlook.

On September 9, Boston Fed President Eric Rosengren, speaking at the South Shore Chamber of Commerce, Massachusetts, was very hawkish. In his speech, Rosengren advocated further rate increases as a means to deal with the asset bubbles, which he believes to be a serious potential threat. Still, he was cautious enough to only call for a “gradual normalization”:

My personal view, based on data that we have received to date, is that a reasonable case can be made for continuing to pursue a gradual normalization of monetary policy.

Same day, Federal Reserve Governor Daniel K. Tarullo in his CNBC interview said that he would need to see a better price index growth before raising the rates. Nevertheless, he did not dismiss a probability of a rate hike this year.
Conveniently, the US CPI numbers will be reported this Friday by the Bureau of Labor Statistics.
On September 12, Fed Governor Lael Brainard spoke at the Chicago Council on Global Affairs and was very dovish in her remarks about monetary policy:

Several econometric models and estimates from market participants suggest the current real neutral rate is at or close to zero, and any increase is likely to be shallow and slow. These estimates imply that it may require a relatively more modest adjustment in the policy rate to return to neutral over time than previously anticipated.

In her opinion, the risks of raising the rates too fast are bigger than the risks of keeping them low for too long because of the asymmetry of the conventional monetary tools. There is no upper limit for raising the rates whereas there is a lower bound for cutting them.
Economic data
Employment
Employment is currently the only economic metric that is doing better than the Fed had anticipated originally. Some market participants prefer to focus on poor monthly nonfarm payrolls releases that appear from time to time, but, in my opinion, FOMC members pay more attention to the  growth in nonfarm employment and, beyond doubt, this indicator is doing well.
The FRED chart below is the US total nonfarm payrolls from March 2015 through August 2016. As you can see, during 8 months following December 2015 interest rate hike, employment continued to rise in a trend similar to  period of 8 months — 1.452 million vs. 2.174 million new payrolls: 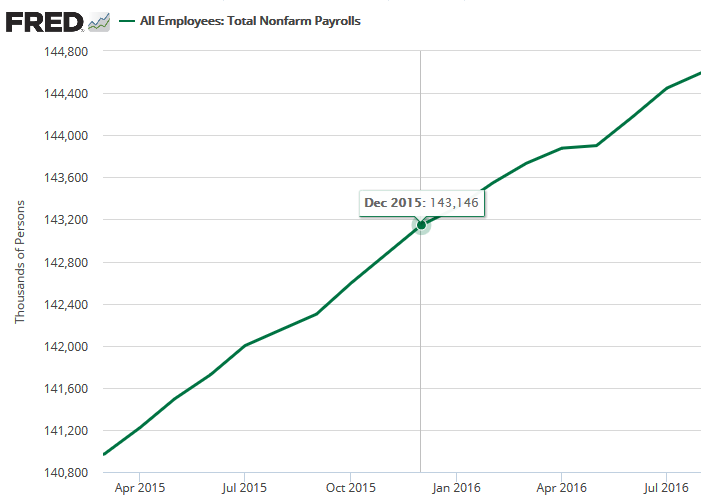 Inflation
Core personal consumption expenditures (PCE), which Fed considers as a primary metric of inflation in the USA, is not doing that great. It got stuck in a sort of consolidation zone between 1.55% and 1.65% annual rate — quite below the 2% target: 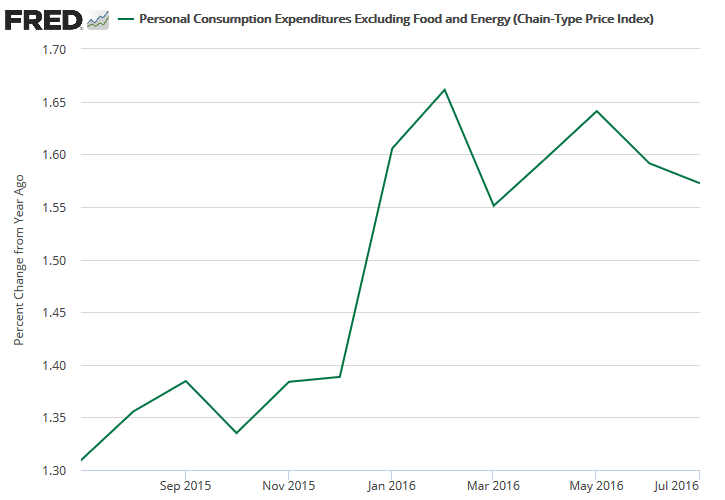 As you can see, the 5-year trend does not help to inspire optimism here:

There will be three more important economic releases before the next FOMC meeting and all of them are : PPI and retail sales on Thursday, and CPI on Friday. However, there is not much they can change. Only a significant deviation from the expected values will have any power over FOMC members’ decision.
GDP
Quarterly GDP growth does not look that bad on a  basis (last 5 years). However, since Q4 of 2015 it goes below the ‘normal’ 2% growth rate. 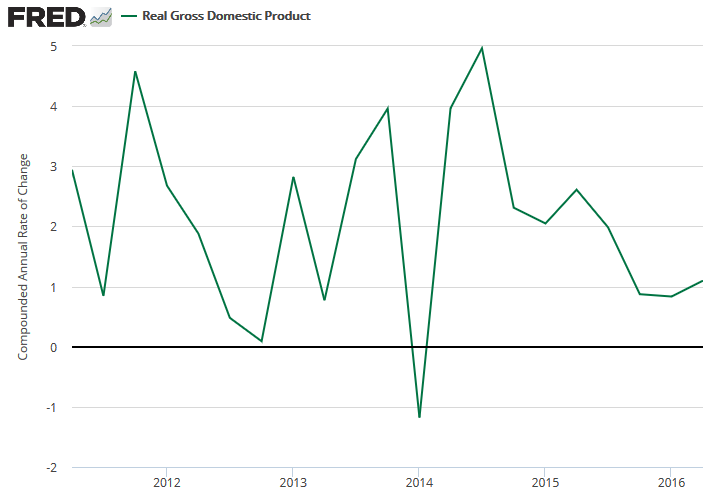 The real question is whether it is a temporary slowdown of expansion or a  development? The third quarter value would tell us more about it, but we will not see it until October 28. Fortunately, we still have a tool to assess the approximate GDP change in the current quarter — nowcasts.
The Federal Reserve Bank of Atlanta prepares a frequently updated nowcast of the US GDP growth rate. The current estimate for Q3 2016 according to their model is 3.3%. Their final update before the upcoming monetary policy meeting will be on September 20.
The Federal Reserve Bank of New York released its latest weekly GDP nowcast on September 9. It shows 2.8% growth for the third quarter of this year. Its final release before the FOMC event will be on September 16.
The Federal Reserve Bank of Philadelphia does not offer a nowcast, but instead issues quarterly surveys of professional forecasters. The Q3 2016 survey, released on August 12, points at 2.6% growth.
Wall Street Journal also publishes its survey of the economic forecasters. GDP is expected to grow at 2.9% in Q3 2016 according to their September poll.
It is important to remember that nowcasts and surveys are not accurate. For example, they have significantly overshot the Q2 2016 value (by more than 1%). Still, they provide some glimpse into the future of the GDP indicator.
My opinion
I am quite certain that the rate will be increased by the end of this year. Due to the lack of press conference and projections release after November meeting, the best opportunities to do this are September and December meetings.
With economy stabilizing and some FOMC members turning heads to the overheated markets, with most Brexit and China’s slowdown fears behind, inflation remains the only concern for the Fed this time. It is definitely not bad (see above), but not good enough to justify a higher interest rate.
I would not bet on rate hike in September, but even if we do not see it this time, we will see a number of FOMC members dissenting. And this would be a surefire signal of a rate adjustment at December meeting.
Poll

What will FOMC decide on its September 2016 meeting?

The poll will expire on September 21 at 17:00 GMT â one hour before the rate decision is announced.
If you have a a detailed view on how the US Federal Open Market Committee is going to act during its September 20–21 meeting and what will they be looking at to decide the future of the federal funds rate, please share your thoughts using the commentary form below.