EUR/USD rose today even though economic data released from the United States over the trading session was good and should have supported the dollar. It looks like markets thought that three consecutive days of gains were too much for the greenback and the currency should pause before deciding whether it can go higher. The  sentiment remains in favor of the US currency, especially after yesterday’s policy minutes released by the Federal Open Market Committee.
Initial jobless claims were at the seasonally adjusted level of 246k last week, unchanged from the previous week’s revised reading. Experts had predicted an increase to 252k. (Event A on the chart.)
Both import and export prices rose in September. Import prices were up 0.1%, matching forecasts exactly, after falling 0.2% in August. Export prices increased 0.3% last month following the 0.8% drop the month before. (Event A on the chart.)
Crude oil inventories expanded by 4.9 million barrels last week, much more than analysts had predicted (0.4 million). The increase followed the 3.0 million drop in the preceding week. Meanwhile, total motor gasoline inventories were down by 1.9 million barrels but remained well above the upper limit of the average range. (Event B on the chart.)
Yesterday, minutes of the FOMC policy meeting in September were released (not shown on the chart), demonstrating a rather hawkish sentiment of US policy makers:

Members generally agreed that the case for an increase in the policy rate had strengthened. 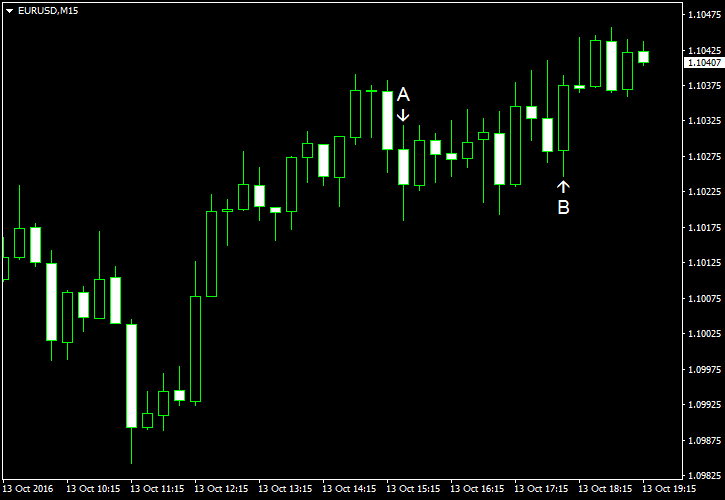