EUR/USD Drops on US Data, Fails to Rebound

EUR/USD dropped today after a bunch of positive economic reports from the United States reinforced investors’ belief that the Federal Reserve is going to hike its interest rates in December. The currency pair made an attempt to rebound after the consumer confidence report showed an unexpected drop, but the bounce was very , and now the dollar continues to gain on the euro.
PPI rose 0.3% in September, more than analysts had predicted — 0.2%. The index was unchanged in August. (Event A on the chart.)
Retail sales increased 0.6% last month, in line with expectations, after falling 0.2% the month before. (Event A on the chart.)
Preliminary Michigan Sentiment Index slid from 91.2 in September to 87.9 in October while experts were anticipating an increase to 92.1. (Event B on the chart.)
Business inventories rose 0.2% in August compared to the median forecast of 0.1% growth. The stockpiles demonstrated no change in July. (Event B on the chart.)
Update: Treasury budget turned from deficit of $107.1 billion in August to surplus of $33.4 billion in September. It was a bit bigger than the forecast $30.0 billion. (Event C on the chart.) 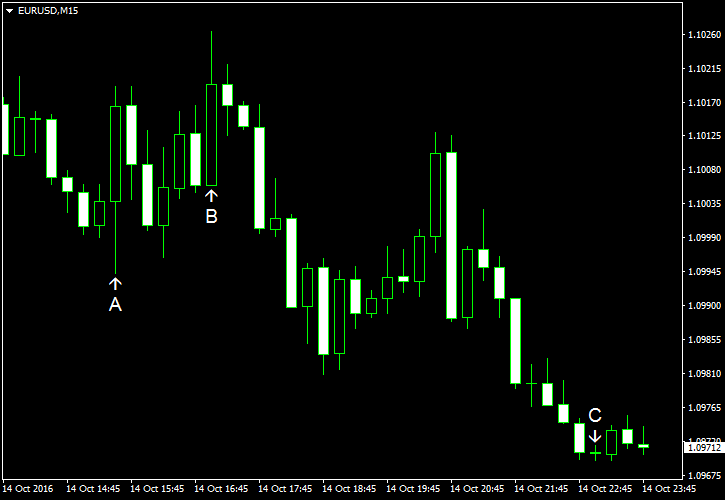