EUR/USD resumed its declined today after staying flat yesterday. The currency pair also traded sideways at the start of the current session, but has started a decline at 12:00 GMT and is moving down currently. Economic data from the eurozone (namely, from Germany) was good while the US consumer confidence indicator was disappointing, but that had little impact of the performance of the pair.
S&P/ home price index was up 5.1% in August from a year ago, matching forecasts exactly and rising almost at the same rate as in July (5.0%). The index was up 0.4% . (Event A on the chart.)
Richmond Fed manufacturing index improved but remained in the negative territory, rising from -8 to -4 in October. It was close to market expectations of -5. (Event B on the chart.)
Consumer confidence fell to 98.6 in October from 103.5 in September (negatively revised from 104.1). It was the first drop after four consecutive monthly gains. Experts had predicted a smaller decline to 101.5. (Event B on the chart.)
Yesterday, a flash report on Markit manufacturing PMI was released, showing an increase from 51.5 in September to 53.2 in October. Analysts had expected basically no change in the indicator. (Not shown on the chart.) 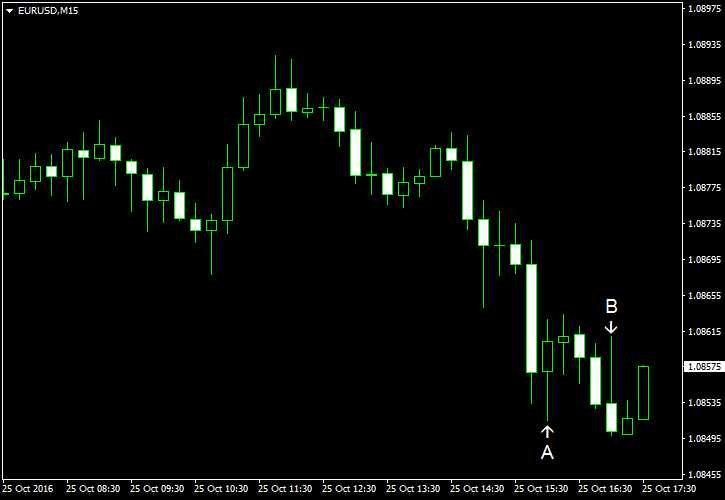