EUR/USD Climbs as Outcome of US Elections Clouded

EUR/USD rallied as the victory of Hillary Clinton in the US presidential elections looked less certain after the Federal Bureau of Investigation reopened the probe into Clinton’s emails. While on Monday it seemed like the impact of the news faded, today market analysts use the investigation as an explanation for the dollar’s weakness. As for US economic data, the manufacturing sector looked strong while construction spending showed an unexpected decline.
Markit manufacturing PMI climbed from 51.5 in September to 53.4 in October according to the final reading. The actual figure was slightly better than the preliminary estimate of 53.2 and the forecast value of 53.3. (Event A on the chart.)
ISM manufacturing PMI rose from 51.5% to 51.9% in October, also a tad above the forecasts of 51.8%. (Event B on the chart.)
Construction spending fell 0.4% in September from August instead of rising by 0.5% as analysts had predicted. The August figure received a small positive revision from a decline by 0.7% to 0.5%. (Event B on the chart.) 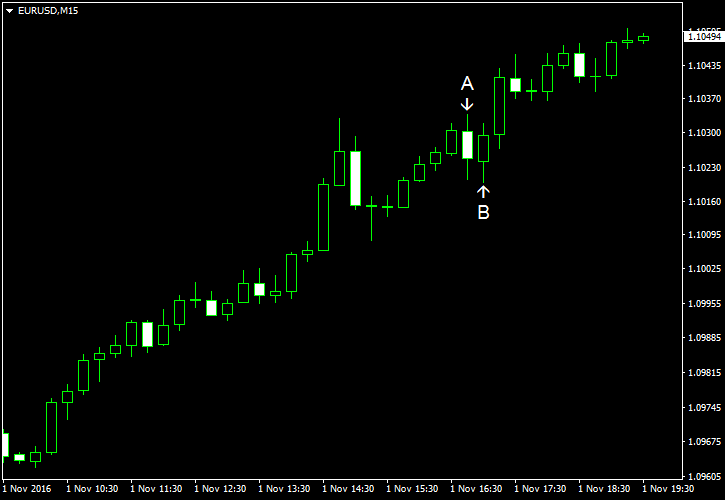