EUR/USD was rising today for the most part of the trading session, though it has started a retreat as of 15:00 GMT. Currently, the currency pair is trying to bounce. The Federal Open Market Committee did not influence moves of the pair much, leaving monetary policy unchanged. The employment report from Automatic Data Processing was unexpectedly bad, allowing EUR/USD to reach the highest level since October 11.
ADP employment rose by 147k in October from September, missing the analysts’ median estimate of 166k. The September increase received a sizeable positive revision from 154k to 202k. (Event A on the chart.)
Crude oil inventories swelled by as much as 14.4 million barrels last week and are at the upper limit of the average range. That is compared to the forecast increase by 1.6 million and the previous week’s drop by 0.6 million. Meanwhile, total motor gasoline inventories dropped by 2.2 million barrels but remained well above the upper limit of the average range. (Event B on the chart.)
FOMC decided to leave its monetary policy unchanged at today’s meeting but signaled that the case for tighter policy is strengthening (event C on the chart):

The Committee judges that the case for an increase in the federal funds rate has continued to strengthen but decided, for the time being, to wait for some further evidence of continued progress toward its objectives. 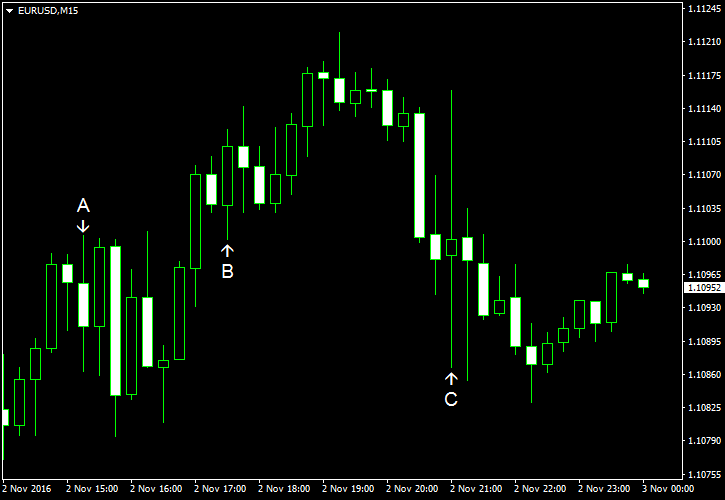