EUR/USD was rising for two sessions but halted its rally today. US economic data was either in line with expectations or worse, giving the dollar no significant advantage. Now, traders focus their attention on tomorrow’s nonfarm payrolls. Yesterday’s ADP employment data was surprisingly poor, leading to concerns that the official data from Bureau of Labor Statistics will be bad too.
Initial jobless claims climbed from 258k to 265k last week. Analysts did not expect any significant change. (Event A on the chart.)
Preliminary nonfarm productivity rose 3.1% in Q3 2016, much more than specialists had anticipated (1.7%). The indicator was down 0.6% in the preceding three months. (Event A on the chart.)
Markit services PMI climbed from 52.3 in September to 54.8 in October according to the final estimate. It was exactly the same as the preliminary reading and the analysts’ consensus forecast. (Event B on the chart.)
ISM services PMI logged the same value as well in October — 54.8%. Unlike the Markit indicator, though, it was below the forecast value of 56.2% and the September reading of 57.1%. (Event C on the chart.)
Factory orders increased 0.3% in September, a bit more than was forecast (0.2%) but a bit less than in August (0.4% — revised from 0.2%). (Event C on the chart.) 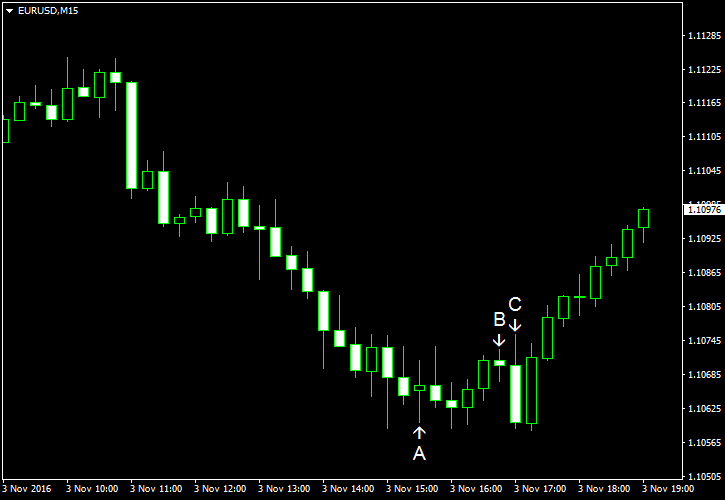