EUR/USD Below Opening After NFP

EUR/USD traded below the opening level today after the release of nonfarm payrolls. The data was mixed yet again as the headline number demonstrated employment growth, but other parts of the report were good. Additionally, the trade deficit fell more than was anticipated. The currency pair sank after the report, attempted to bounce immediately afterwards, and was struggling to find a direction since then.
Nonfarm payrolls demonstrated growth by 161k in October, missing the median estimate of 174k. On a positive side, the September figure received a positive revision from 156k to 191k. Unemployment rate ticked down from 5.0% to 4.9%, in line with expectations. Average hourly earnings rose by 0.4% compared to the forecast increase of 0.3% (the same as the revised September’s gain). (Event A on the chart.)
Trade balance deficit shrank to $36.4 billion in September down from $40.5 billion in August. It was smaller than the $37.5 billion value forecast by analysts. (Event A on the chart.) 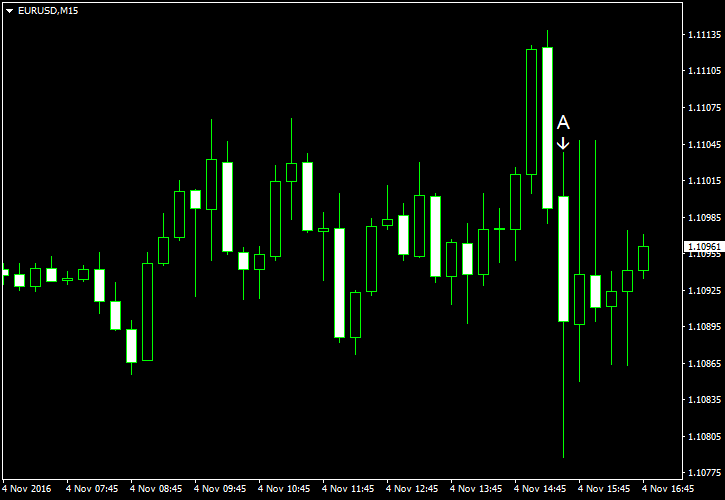