Who Wins US Presidential Elections 2016? How Will Currencies React?

We have already covered the US presidential elections and their possible effect on the US dollar in a blog post on February 19. Back then, the elections were still in their primaries stage, but the apparent leaders (Clinton and Trump) have already emerged as the two most likely persons to sit next in the White House. The implications of their presidency for the FX market have also been quite clear, though now they can be redefined more precisely. Now we also have an advantage of some hindsight knowledge deductible to market reactions to statements made by Clinton and Trump during the last 9 months.

The difference between Hillary Clinton and Donald Trump is huge — both in personal and political sense. We may loath the corruptedness of one or be disgusted by the bigotry of another, however, as Forex traders, we are mostly interested in their political and economical views that might affect the foreign exchange market (mainly, the USD). The president of the United States is in a very powerful position in relation to how he or she may influence the currency’s position. To simplify the analysis, I will limit it to the three most important factors: monetary policy, budget, and foreign trade.
Hillary Clinton
Monetary policy
Hillary plans to replace the bankers with the  officials as the heads of the Fed’s regional reserve banks to strengthen the agency’s supervisory and regulatory functions. Other than that she seems to be neutral towards the current position of the Federal Reserve. Still, removing private sector representatives (“bankers”) could be viewed as an attack on the Fed’s political neutrality, which might hurt the US dollar through lower trust in the adequacy of the US monetary policy.
Budget
Hillary proposes tax increases on the wealthy with minor tax easing for the middle class. This plan will offer an immediate advantage to the US dollar’s foreign exchange position as it will help reduce the government debt. It could also lead to  negative consequences for the currency should it discourage business activity and thus pull back future GDP growth. Moreover, an increase in tax revenue would be compensated by the promised increased government spending.
Foreign trade
Mrs. Clinton is not a big supporter of the new trade deals (
Partnership and  for example). However, she does not oppose them entirely and would accept new trade deals if they are overall positive for the US economy. Her stance can be interpreted as  through upholding the use of the US currency in global trade.
Donald Trump
Monetary policy
It looks like Mr. Trump does not have any hard stance on the monetary policy. He was pro low interest rates in May. Then he switched to opposition. From his words, it looks like he strongly supports the independence of the Federal Reserve, however, he would replace Janet Yellen if elected as the president. Replacing the head of the Fed without Senate’s clear support could lead to months of uncertainty and some hard times for the US dollar. Auditing the Fed is also not one of his greatest ideas in regards to preserving the institution’s independence and credibility. At the same time, assigning a major hawk (as opposed to Yellen’s particularly dovish stance on rates) to this position would be a  bullish factor for the US currency.
Budget
Trump’s plan for the tax reform is focused on cutting most of the taxes related to business stimulus and widening some tax brackets. It would massively inflate the US budget deficit, putting a strain on the dollar’s FX value. However, running a higher budget deficit at current low interest rates could be a  positive factor in case the  measures would indeed promote business activity, adding to real GDP growth. Also, some of Donald Trump’s proposals would reduce budget spending albeit not to significant extent.
Foreign trade
While Donald’s plans to make the US trade with the rest of the world “more fair” would end up in a reduced trade balance deficit, this result would be achieved by reducing both exports and imports sides of the balance. Leaving WTO and  on new important trade deals would be damaging to the US economy both in  and  perspectives. It would undoubtedly demote the greenback’s use as the global trade currency, sending it into a downfall.
Market sentiment
Strangely, the current market sentiment has not yet consistently favored one candidate over other in terms of USD strength. The dollar index is rather shy in its reaction to the US elections news. EUR/USD also seems to be unmoved by the changes in the US electoral preferences for now.
However, the same cannot be said about USD/MXN. While Trump’s victory might be perceived as the  in theory, it will certainly send the Mexican currency down the pipe. And the markets have already proven that by reacting to candidate debates and changes in the election polls.
The inverse correlation between the Clinton lead over Trump in the polls and the USD/MXN rate is particularly stark. The chart below plots the inverted RCP average Clinton/Trump spread on the daily USD/MXN candles. As you can see, the correlation is very strong during the last 4 months. It also looks like the spread leads the currency pair by a few days. You can click on the chart to see its version with data starting from July 2015 and the scale grid drawn for the polls spread: 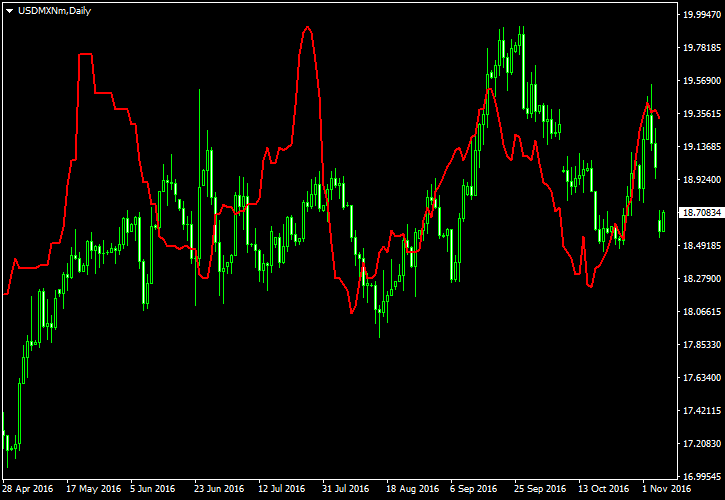 Chances
The RCP average compiled by RealClearPolitics shows 1.8 percent lead of Clinton over Trump (46.6% vs. 44.8% as of November 7). Bookmakers put Clinton’s probability of winning at 82.4% vs. Trump’s 17.3%.
According to Odds Shark, the probability of Hillary Clinton’s win is also higher. You would need to bet $375 to win $100 on her victory, whereas betting $100 on Trump would result in a gain of $275:

Poll
In the poll below, I ask you to vote according to your personal forecast — who will win the upcoming elections. NOT whom you would LIKE to win, but who do you think is the most probable winner.

Whom do you expect to be elected as the next US president?

This poll will expire at 12:00 UTC on November 8.
If you want to tell us more on why do you believe that either Clinton or Trump will become the next president of the United States or if you want to talk about the US elections’ effect on Forex trading, please feel free to use the commentary form below.