This week is light on economic news from the United States, but they would not have any meaningful impact today anyway as markets focused all their attention on the surprise victory of Donald Trump in the US presidential election. Initially, EUR/USD spiked to the upside but retreated below the opening level later as markets digested the news. Now, analysts speculate the Trump’s presidency may be actually positive for the dollar in the longer term.
Wholesale inventories rose 0.1% in September from August according to the final estimate compared to the preliminary reading that showed growth by 0.2%. The inventories were down 0.2% in August. (Event A on the chart.)
Crude oil inventories rose by 2.4 million barrels last week and were near the upper limit of the average range for this time of year. That is compared to the analysts’ consensus forecast of 1.3 million growth and the previous week’s monstrous gain by 14.4 million. Total motor gasoline inventories fell by 2.8 million barrels last week but were well above the upper limit of the average range. (Event B on the chart.)
On Monday, a report of consumer credit was released, showing an increase by $19.3 billion in September from August, which exceeded market expectations of $17.6 billion. The August growth was revised from $25.9 billion to $26.8 billion. (Not shown on the chart.) 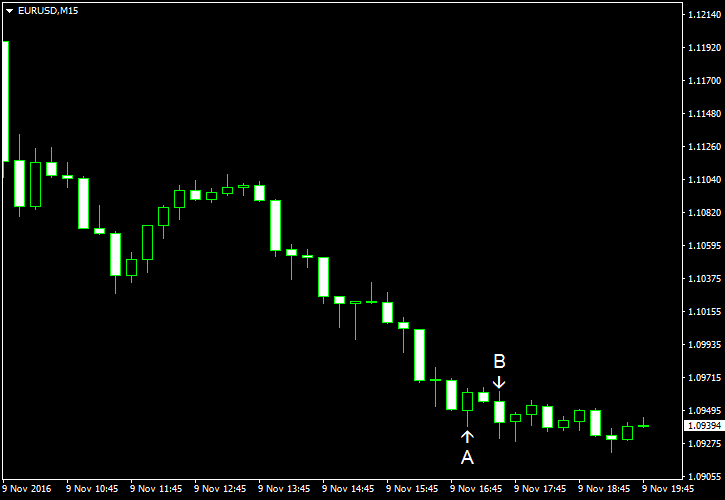