EUR/USD was rising at the start of today’s trading session but failed to maintain the rally and is trading below the opening level right now. It was not a surprise, considering that US economic data was very good as basically all reports beat expectations. Data from Europe was fairly decent as well, but it was not enough to support the euro.
Retail sales rose 0.8% in October, above the market expectations of a 0.6% increase. The September’s figure received a substantial revision from 0.6% to 1.0%. (Event A on the chart.)
NY Empire State Index climbed from -6.8 in October to 1.5 in November, rising above zero for the first time in four months. Experts anticipated the same figure but negative (-1.5). (Event A on the chart.)
Import prices rose 0.5% in October, that is compared to the forecast growth of 0.4% and the previous month’s revised gain by 0.2%. Export prices increased 0.2% following the 0.3% increase in September. (Event A on the chart.)
Business inventories expanded 0.1% in September while analysts had predicted the same 0.2% rate of growth as in August. (Event B on the chart.)
On Friday, a preliminary report on Michigan Sentiment Index was released, showing an increase from 87.2 to 91.6, which exceeded the median forecast of 87.4. (Not shown on the chart.) 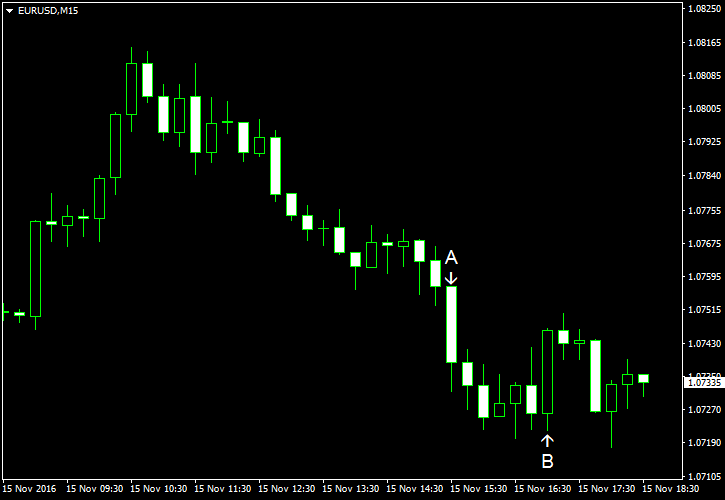