EUR/USD dropped on Wednesday, falling to the lowest level since the big jump on December 3 (a day that followed the mass shooting in the United States), as the dollar’s rally continued. The dollar gained on the euro even though basically all of Wednesday’s economic reports released from the United States missed market expectations.
PPI showed no change in October while analysts had predicted the same 0.3% rate of growth as in September. (Event A on the chart.)
Industrial production also failed to meet forecasts, staying unchanged last month as well instead of rising by 0.2% as was predicted. The previous month’s reading was revised from an increase by 0.1% to a drop by 0.2%. Capacity utilization slipped by 0.1 percentage point to 75.3% while forecasters promised it to rise by the same amount. (Event B on the chart.)
Crude oil inventories swelled by 5.3 million barrels last week after increasing by 2.4 million the week before and were above the upper limit of the average range. Total motor gasoline inventories were up by 0.7 million barrels. (Event C on the chart.)
Net foreign purchases were at -$26.2 billion in September. That is compared to the predicted reading of $32.9 billion and the previous month’s $45.5 billion (revised down from $48.3 billion). (Event D on the chart.) 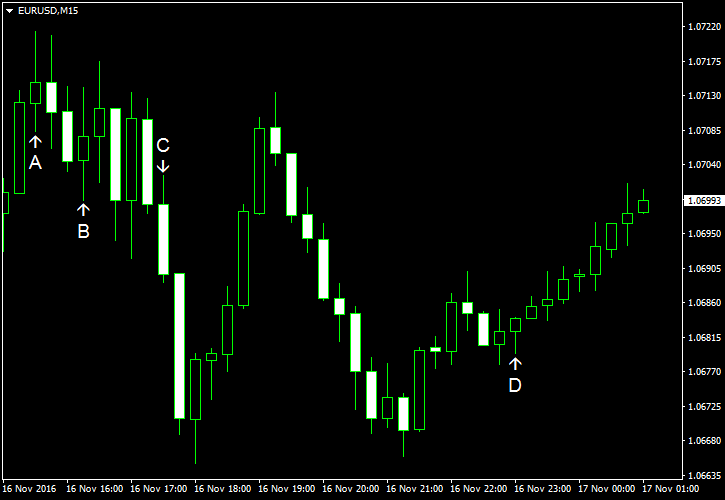