EUR/USD fell today after the release of US economic data. While some indicators trailed expectations, the data was good for the most part. The most notable report was private employment data from Automatic Data Processing, which turned out to be much better than forecasts.
ADP employment demonstrated growth by 216k in November, which far exceeded the forecast increase by 161k and the previous month’s 119k (revised down from 147k). (Event A on the chart.)
Personal income and spending increased in October. Income was up 0.6%, above the median forecast of 0.4% growth. Spending rose 0.3%, trailing the analysts’ average estimate of 0.5%. Both indicators got a positive revision for their September growth figures. Income was revised from 0.3% to 0.4% while spending was revised from 0.5% to 0.7%. (Event B on the chart.)
Chicago PMI climbed from 50.6 in October to 57.6 in November, far above the 52.1 level predicted by forecasters. (Event C on the chart.)
Pending home sales inched up 0.1% in October. That is compared to the consensus forecast of 0.3% and the previous month’s big gain by 1.4% (slightly revised down from 1.5%). (Event D on the chart.)
US crude oil inventories fell by 0.9 million barrels last week instead of rising by 0.7 million as specialists had predicted but stayed close to the upper limit of the average range. At the same time, total motor gasoline inventories increased by 2.1 million barrels. (Event E on the chart.) 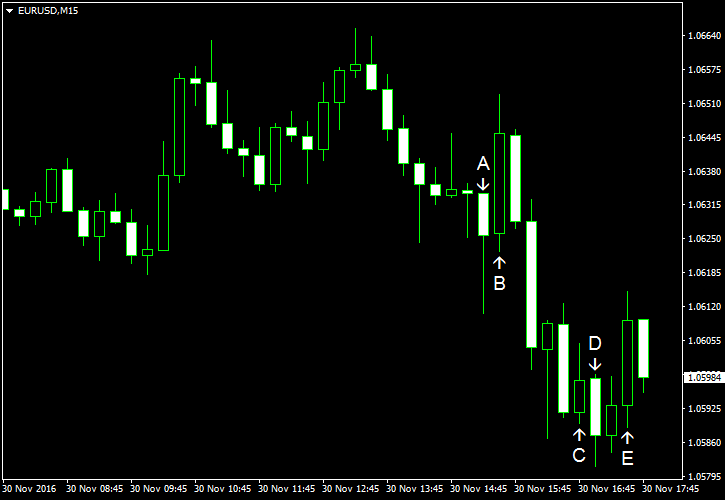