EUR/USD sank today, erasing intraday gains, after the Federal Open Market Committee hiked interest rates. Such move was widely expected by markets, so no surprise here. What was surprising is the upward revision of the projected path for the federal funds rate, meaning that US policy makers now plan three rate hikes next year instead of two expected previously. As for today’s economic data from the United States, it was mixed.
PPI rose 0.4% in November after showing no change in October. The consensus forecast promised a smaller increase by 0.1%. (Event A on the chart.)
Retail sales were up 0.1% in November, failing to reach the predicted increase of 0.3%. The October growth was revised from 0.8% down to 0.6%. (Event A on the chart.)
Industrial production and capacity utilization fell in November. Production was down 0.4%, two times the forecast drop of 0.2%, after rising 0.1% in October (revised, showed no change before the revision). Capacity utilization declined from 75.4% to 75.0%, close to the analysts’ average projection of 75.1%. (Event B on the chart.)
Business inventories fell 0.2% in October. Experts were counting on a drop by 0.1%. The stockpiles rose 0.1% in September. (Event C on the chart.)
Crude oil inventories fell by 2.6 million barrels last week compared to the forecast of a 1.4 million drop and the previous week’s decline by 2.4 million. The stockpiles were near the upper limit of the average range. Total motor gasoline inventories rose by 0.5 million barrels. (Event D on the chart.)
FOMC raised the target range for the federal funds rate by a quarter percentage point to 0.75%. (Event E on the chart.) The Committee said about its future monetary policy in the statement:

In light of the current shortfall of inflation from 2 percent, the Committee will carefully monitor actual and expected progress toward its inflation goal. The Committee expects that economic conditions will evolve in a manner that will warrant only gradual increases in the federal funds rate; the federal funds rate is likely to remain, for some time, below levels that are expected to prevail in the longer run. 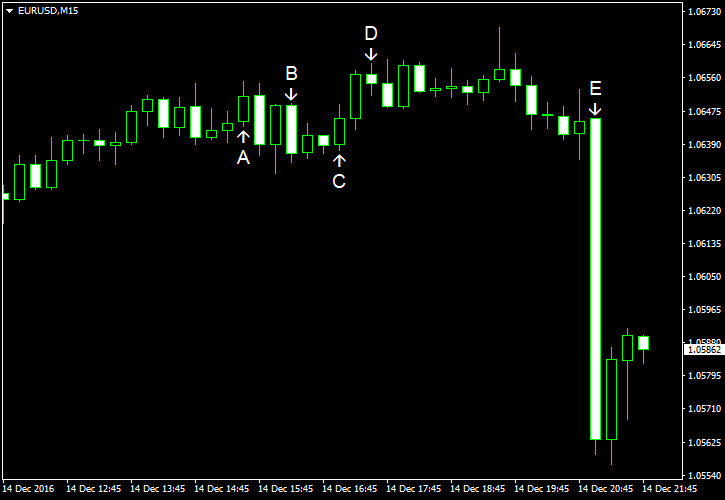