EUR/USD fell today, touching the lowest level since the early January 2003. As of now, the currency pair rebounded from the low but still trades far below the opening level. Yesterday’s Federal Reserve policy announcement continued to feed the dollar’s strength, and with today’s economic reports from the United States being either in line with expectations or better, there is no reason for the greenback to stop its rally. Talks about EUR/USD parity intensified, though the currency pair is yet rather far from the 1.0000 level.
CPI rose 0.2% in November, matching forecasts exactly, after increasing 0.4% in October. (Event A on the chart.)
Philadelphia Fed manufacturing index jumped from 7.6 in November to 21.5 in December. Markets were not prepared for a such big jump, expecting just a mild increase to 9.1. (Event A on the chart.)
Initial jobless claims were down slightly from 258k to 254k last week. (Event A on the chart.)
Current account deficit shrank to $113.0 billion (preliminary) in Q3 2016 from $118.3 billion in Q2. The actual value was close to the analysts’ average projection of $111.0 billion. (Event A on the chart.)
NY Empire State Index climbed from 1.5 to 9.0 in December. As with the Philadelphia Fed index, economists did not anticipate such a big jump, expecting just a small increase to 3.2. (Event A on the chart.)
Flash Markit manufacturing PMI was at 54.2 in December, in line with experts’ predictions and little changed from the November figure of 54.1. (Event B on the chart.)
Net foreign purchases were at $9.4 billion in October. That is compared to the previous month’s -$26.2 billion and the forecast value of -$32.3 billion. (Event C on the chart.) 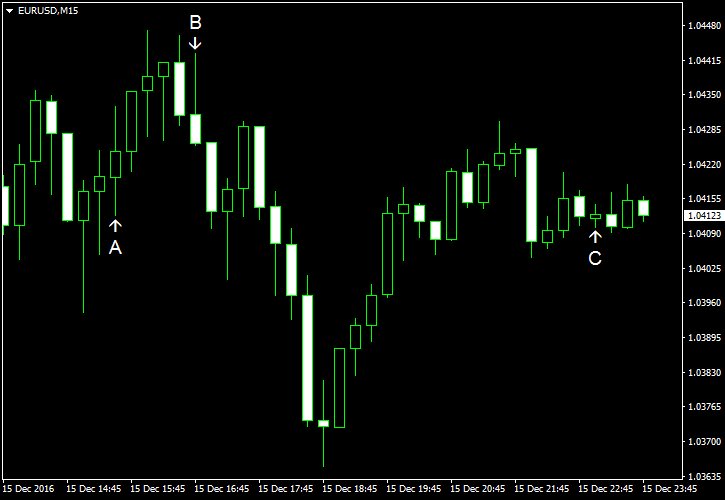