USD Rises vs. EUR, Loses Part of Gains After FOMC

The dollar rose versus the euro today as most of US economic indicators were good (with the exception of construction spending), including employment that showed unexpectedly strong growth. The dollar trimmed its gains after the Federal Open Market Committee left its monetary policy without change and issued cautious statement. The March meeting should be more important as it will be accompanied by economic projections and a press conference.
ADP employment grew by 246k in January. The growth exceeded the forecast value of 165k and the previous month’s increase of 151k (revised from 153k). (Event A on the chart.)
Final Markit manufacturing PMI rose from 54.3 in December to 55.0 in January. That was very close to the consensus forecast and the preliminary reading of 55.1. (Event B on the chart.)
ISM manufacturing PMI climbed from 54.5% in December to 56.0% in January, above the 55.0% level predicted by analysts. (Event C on the chart.)
Construction spending fell 0.2% in December from November instead of rising at the same rate as experts had predicted. The indicator gained 0.9% in November. (Event C on the chart.)
US crude oil inventories rose by 6.5 million barrels last week, noticeably higher than the analysts’ median projection (2.6 million) and the previous week’s rate of growth (2.8 million). The stockpiles remained near the upper limit of the average range for this time of year. Total motor gasoline inventories increased by 3.9 million barrels and were above the upper limit of the average range for this time of year. (Event D on the chart.)
The tone of the FOMC statement was not very hawkish after the Committee left its monetary policy unchanged. The statement said that “business fixed investment has remained soft” and mentioned low inflation (event E on the chart):

Inflation increased in recent quarters but is still below the Committee’s 2 percent objective. measures of inflation compensation remain low; most measures of  inflation expectations are little changed, on balance. 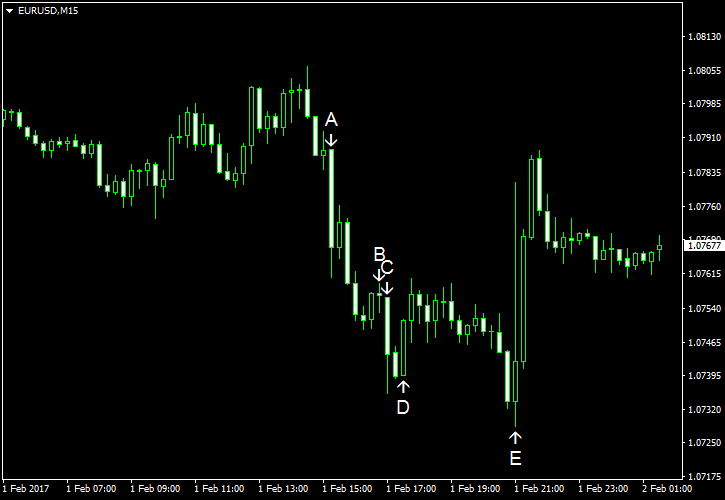