EUR/USD was swinging widely immediately after the release of nonfarm payrolls but decided to go higher after all. Apparently, markets preferred to pay more attention to  wage growth rather than to solid employment growth that was above expectations. With factory orders and the ISM indicator also trailing forecasts, the currency pair went even higher.
Nonfarm payrolls rose by 227k last week in January. That was a far better reading than the predicted 179k and the December’s 157k. Unemployment rate ticked up unexpectedly from 4.7% to 4.8%. Average hourly earnings rose by approximately 0.01%, trailing the analysts’ forecast of 0.03% and the previous month’s increase of 0.02% (revised lower from the initial 0.04%). (Event A on the chart.)
Final Markit services PMI climbed from 53.9 in December to 55.6 in January while the analysts’ median forecast was the same as the preliminary value of 55.1. (Event B on the chart.)
ISM services PMI edged down to 56.5% in January from 56.6% in December (revised down from 57.2%), below the average forecast number of 57.0%. (Event C on the chart.)
Factory orders increased 1.3% in December, missing market expectations of 1.5% growth. The indicator fell 2.3% in November. (Event C on the chart.) 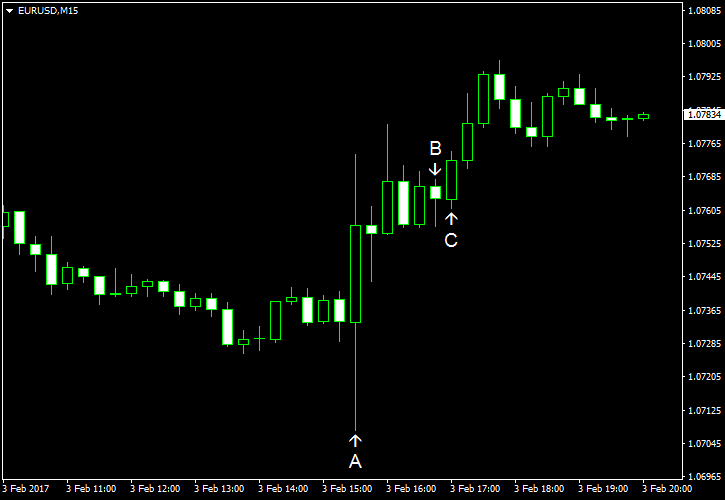