EUR/USD Bounces as US Data Turns from Positive to Negative

EUR/USD dipped intraday on Wednesday but bounced to trade above the opening level later. Moves of the currency pair had a correlation with US economic data. Initially, reports were rather good, boosting the dollar, but the ones released later failed to meet expectations, sending the greenback lower.
CPI demonstrated exactly the same performance as yesterday’s PPI, rising 0.6% in January, two times the forecast gain and the previous month’s increase of 0.3%. (Event A on the chart.)
Retail sales inched up 0.4% in January. That is compared to the predicted increase of 0.1% and December’s growth by 1.0% (revised, 0.6% before the revision). (Event A on the chart.)
NY Empire State Index jumped from 6.5 to 18.7 in January, far exceeding the median forecast of 7.2 and reaching the highest level in more than two years. (Event A on the chart.)
Industrial production and capacity utilization fell in January unexpectedly. Production decreased by 0.3% following the 0.6% increase in December (revised from 0.8%) while experts had promised a small increase by 0.1%. Utilization dropped from 75.6% to 75.3% whereas specialists promised no change. (Event B on the chart.)
Business inventories rose 0.4% in December from November, slightly below the forecast rate of 0.5%. The November increase received a small revision from 0.7% to 0.8%. (Event C on the chart.)
Crude oil inventories swelled by 9.5 million barrels last week from the week before. The expansion was smaller than the previous week’s huge gain by 13.8 million but bigger than the forecast 3.7 million. Total motor gasoline inventories increased by 2.8 million barrels. Both indicators were above the upper limit of the average range for this time of year. (Event D on the chart.)
Net foreign purchases were at -$12.9 billion in December. The negative figure was totally unexpected as analysts had promised a reading of $19.1 billion. On a more positive note, the November value got a revision from $30.8 billion to $34.4 billion. (Event E on the chart.)
Yesterday, a report on PPI was released, showing an increase of 0.6% in January. Analysts were expecting a 0.3% increase, the same as in December. (Not shown on the chart.) 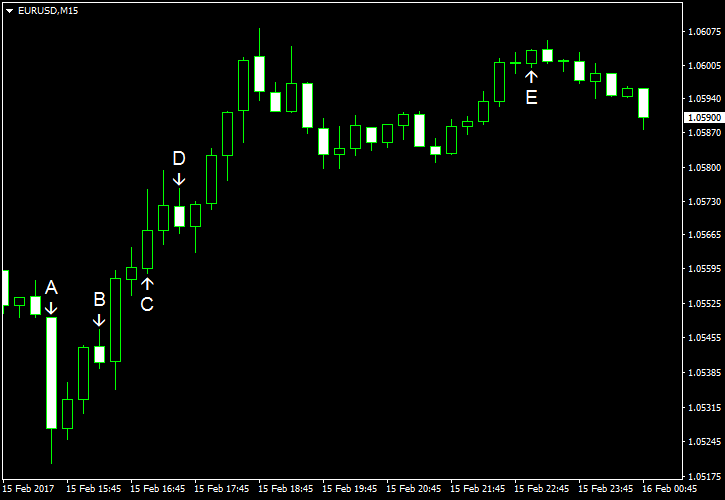