EUR/USD rallied today despite a set of amazing macroeconomic indicators (with the exception of gross domestic product) that was released from the United States during the trading session. In fact, the currency pair surged after the surprise increases of the Richmond manufacturing index and the Conference Board consumer confidence. Market analysts explained the dollar’s weakness by uncertainty ahead of the speech US President Donald Trump is going to deliver to the Congress. Traders were concerned that he will not be clear enough in his explanation of tax reforms and other plans.
The second (preliminary) estimate of US GDP in Q4 2016 showed the same 1.9% growth as in the first (advance) estimate. Economists had hoped for an increase by at least 2.1%. The US economy expanded as much as 3.5% in Q3 2016. (Event A on the chart.)
S&P/ home price index rose 5.6% in December, , exceeding the analysts’ median forecast of 5.3% growth and the previous month’s increase by 5.2%. , the index was up 0.3%. (Event B on the chart.)
Chicago PMI climbed from 50.3 in January to 57.4 in February, reaching the highest level since January 2015. The consensus prediction was far more modest, promising an increase to just 53.2. (Event C on the chart.)
Richmond Fed manufacturing index climbed from 12 to 17 in February instead of falling to 10 as experts were anticipating. (Event D on the chart.)
Consumer confidence jumped from 111.6 in January to 114.8 in February. Specialists missed the mark in this instance as well, expecting a small drop to 111.3. (Event D on the chart.) 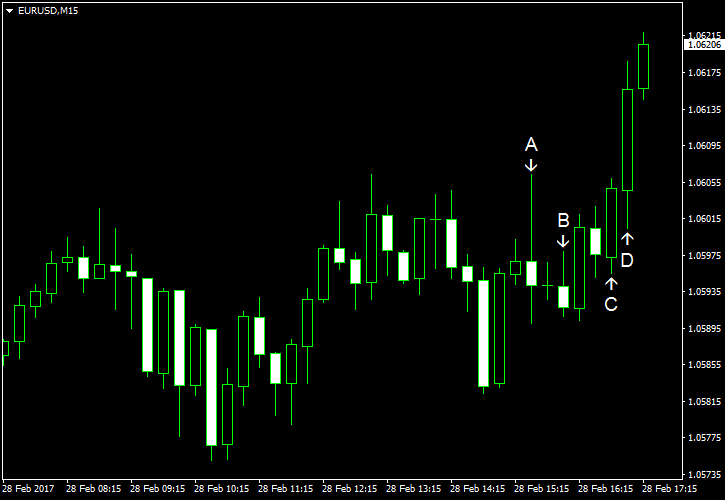