EUR/USD dropped today, falling for the third day in a row. The main reason for the drop was surprisingly amazing US employment data released by Automatic Data Processing on Wednesday. Other macroeconomic reports released from the United States over the trading session were also favorable.
ADP employment gained by as much as 298k in February from January. The huge increase far exceeded the average forecast of 184k. On top of that, the January increase was revised from 246k to 261k. (Event A on the chart.)
Nonfarm productivity rose 1.3% in Q4 2016 according to the revised report, the same as in the preliminary estimate and a bit less than analysts had predicted (1.5%). The indicator was up 3.3% in Q3 2016. (Event B on the chart.)
Wholesale inventories fell 0.2% in January, somewhat more than experts had predicted — 0.1%. The stockpiles dropped 1.0% in December. (Event C on the chart.)
US crude oil inventories swelled by 8.2 million barrels last week. The impressive gain was substantially above the forecasts of 1.1 million barrels and the previous week’s increase of 1.5 million. At the same time, total motor gasoline inventories slumped by 6.6 million barrels but remained near the upper limit of the average range for this time of year. (Event D on the chart.) 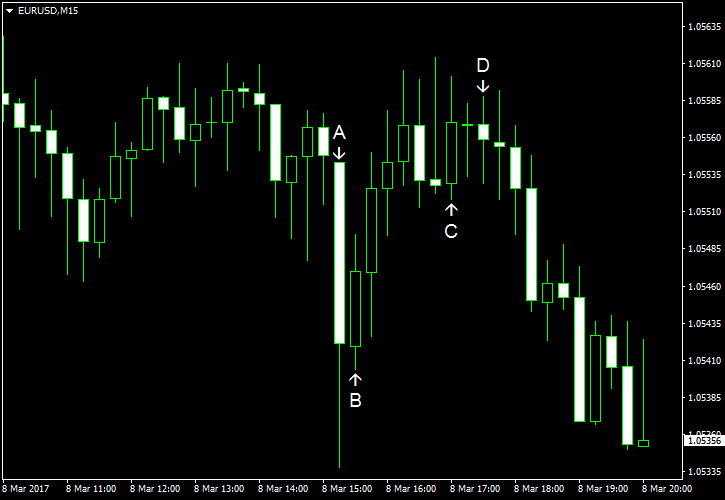