EUR/USD surged more than1% today after the Federal Reserve hiked interest rates. That may seem to some as currencies tend to rise when their respective central banks raise interest rates, thus the dollar should have rallied versus the euro, not vice versa. Yet such performance was not that puzzling, considering such decision was widely expected by markets. Therefore, many traders employed “buy the rumors, sell the fact” strategy. Additionally, the Fed did not update its projected policy path, disappointing those dollar bulls who had thought that hawkish comments from Fed officials might mean more hikes this year than had been planned previously. Furthermore, the Dutch exit polls gave additional boost to the euro as some analysts interpreted them as a sign that populists are not as popular in Europe as it looked.
CPI rose 0.1% in February while analysts promised no growth. The index was up 0.6% in January. (Event A on the chart.)
Retail sales also increased 0.1% last month, but this time the actual reading was below the average forecast (0.2%). On the brighter note, the previous month’s increase was revised up from 0.4% to 0.6%. (Event A on the chart.)
NY Empire State Index edged down from 18.7 to 16.4 in March, though it was still above market expectations of 15.3. (Event A on the chart.)
Business inventories increased 0.3% in January, matching forecasts exactly, after rising 0.4% in December. (Event B on the chart.)
US crude oil inventories fell by 0.2 million barrels last week instead of rising by 3.3 million as analysts had predicted. The stockpiles remained above the upper limit of the average range for this time of year, though. The drop followed the prior week’s huge gain by 8.2 million. Total motor gasoline inventories 3.1 million barrels but were near the upper limit of the average range. (Event C on the chart.)
FOMC increased the target range for the federal funds rate by 25 basis points to 0.75%-1.00%, as was widely expected. Economic projections remained the same as the December projections for the most part. (Event D on the chart.)
Net foreign purchases were at $6.3 billion in January, missing the consensus estimate of $13.4 billion. The indicator was at -$12.9 billion in December. (Event E on the chart.)
Yesterday, a report on PPI was released, showing an increase of 0.3% in February that followed the gain by 0.6% in January. Forecasts promised an increase by just 0.1%. (Not shown on the chart.) 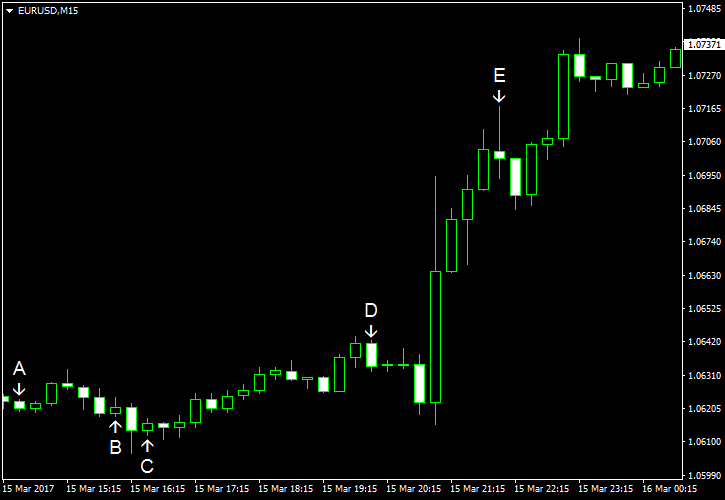