Nonfarm payrolls is a macroeconomic employment report released monthly by the US Bureau of Labor Statistics (or BLS for short). The number represents the quantity of new jobs added by the  private sector during the month. Forex traders consider it as an invariably important report in respect of its effect on the US dollar. They also consider it an invariable bullish report for the USD — the higher the NFP number, the better for the dollar. However, sometimes this logic fails to work, causing a lot of confusion for currency traders.
A prominent example of such deviation could be seen not so long ago — on March 10, when the BLS reported nonfarm payrolls for the month of February. Not only, the reported value of 235k exceeded the median forecast of 196k, the January’s value was also revised from 227k to 238k. Basic trading intuition tells us that the report should have sent the dollar up against other currencies. In reality, USD fell sharply against all its FX counterparts immediately after the release. About half an hour after, the NFP effect has dissolved and the USD continued trading normally — rising against some currencies (Great Britain pound), going flat against others (Swiss franc, Canadian dollar), and falling against others (euro, Japanese yen).
Some traders argue that the effect was due to the fact that the good NFP numbers had already been priced in and so the market participants just took the profit, selling the dollar. The logic behind such explanation is a bit flawed in my opinion. After all, the median forecast was far below the reported value. Also, why the same “priced in” effect does not kick in every time? In my opinion, this explanation is lacking. That is why, I decided to offer my own explanation of why such a good NFP report could lead to a USD sale.
To understand my idea of such an unexpected reaction to nonfarm payrolls, it is necessary to understand what is the most powerful force behind currency moves on the foreign exchange market — the interest rates. All the FX effect of the nonfarm payrolls, CPI, GDP, and other fundamental reports comes from their effect on the expected interest rates. It is the latter, which dictate the strength of one currency against the others.
The surprising thing here is that the expected future interest rates have fallen immediately after the NFP report. How do we know that? Thanks to the CME’s 30-Day Federal Funds Futures, we know what professional traders think of the future rate increases. The big advantage of that market is that there are almost no retail traders there; it is traded by savvy and skilled investors only, thus it is very efficient and tells us a lot about the perceived future path of the federal funds rate.
If we look at on the most traded 30-Day Federal Funds Futures contracts (November 2017), we can see that it has made a strong upswing right after the nonfarm payrolls release on March 10 at 8:30 (EST): 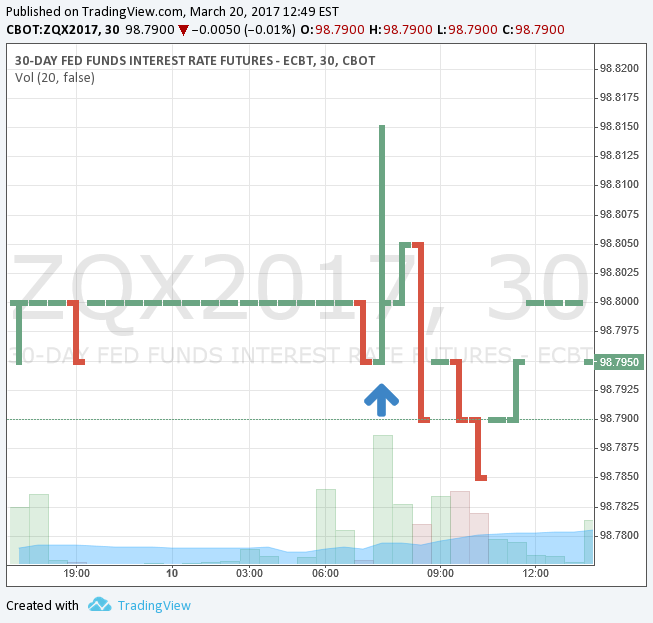 It is important to note that when the federal funds futures price rises, it implies lower interest rate for that month because the price is determined as 100 − Rate.
Now it should be clear that March 10 NFP report was considered as dovish by some big traders in federal funds futures. So, why would the expected USD interest rates fall if the nonfarm payrolls were so good? After all, higher employment means stronger economy, which incentivizes the Federal Reserve to normalize the interest rate, which is still very low nowadays in the United States.
The answer lies in the maximum employment concept. How does Fed define maximum employment? The Fed’s own definition of the maximum employment is quite fuzzy. The current goal is for the U3 unemployment rate to be between 4.5% and 5.0% with a median target of 4.7%. However, it is not something that set in stone, and the Federal Open Market Committee, which determines the federal funds rate, is looking at a wide range of employment related statistics before deciding whether the USA is far from the maximum employment, approaching it, or is already there.
So, what does it have to do with high NFP being bad for the greenback? The answer is pretty obvious — higher than normal pace of new jobs creation (which some Fed members estimate to be around 80k-100k) combined with no aggressive growth in wages signals that the full employment is still not here. And if the US economy is capable of adding so many jobs per month without spurring wage inflation, then there is no case for tightening the rates in a prompt manner, which is of course a bearish signal for the US dollar.
This does not mean that the lower the NFP comes out next time, the better it will be for the US currency. Of course, not. However, Forex traders must watch the future NFP releases closely. Too high a number might be deemed bad for the US dollar, and there is fundamental reason for that — it is a sign of maximum employment being too far away yet. On the contrary, a decline of the monthly values to about 100k would probably signal that the economy approached the maximum employment level, and that the rates may lifted more freely now.
If you disagree with this analysis or if you have some other ideas regarding the current relationship between the US dollar and the nonfarm payrolls reported by the BLS, please use the commentary form below to post them.