EUR/USD Climbs After Release of PMIs from Eurozone

EUR/USD was falling today but bounced after Markit released a bunch of PMI reports for eurozone, all of which exceeded expectations. Meanwhile, PMIs for the United States were disappointing, hurting the US dollar. The greenback was also under pressure because traders were cautious, waiting for the vote on Donald Trump’s healthcare bill. The vote is considered to be a test of Trump’s ability to pass important legislation.
Durable goods orders rose by 1.7% in February, exceeding market expectations of 1.1% growth. The previous month’s increase was revised from 1.8% to 2.0%. (Event A on the chart.)
Flash Markit services PMI fell from 53.8 in February to 52.9 in March instead of rising to 54.9 as analysts had predicted. Flash Markit manufacturing PMI also demonstrated a drop, falling from 54.2 to 53.4, trailing the average forecast of 53.9. (Event B on the chart.) 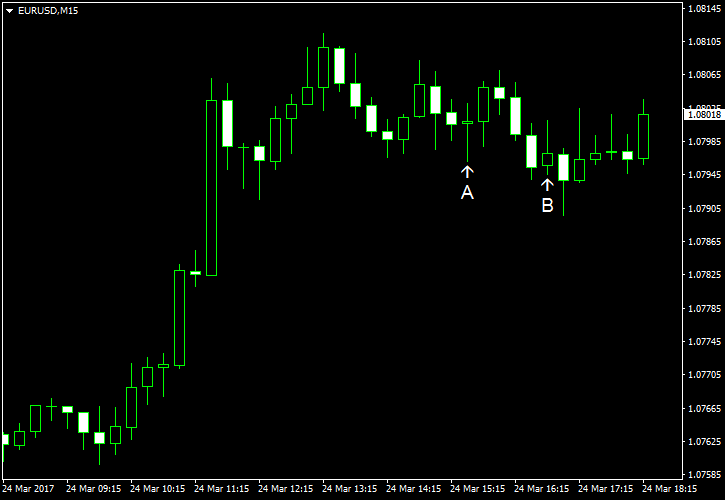