EUR/USD halted its decline today, rising a bit, even though eurozone inflation slowed sharply this month. (Event A on the chart.) The possible reason for the relatively weak performance of the dollar were relatively dovish remarks from Federal Reserve’s voting member William Dudley who said that “thereâs not this huge rush that we have to tighten monetary policy quickly.” Still, the gain of EUR/USD was not big, and the currency pair was heading for the first weekly drop in five weeks.
Personal income and spending increased in February. Income was up 0.4%, matching forecasts exactly, after rising 0.5% in January. Spending increased 0.1% while experts had anticipated the same 0.2% rate of growth as in the preceding month. Core PCE inflation was at 0.2%, in line with expectations and down from 0.3% in January. (Event B on the chart.)
Chicago PMI rose from 57.4 to 57.7 in March instead of falling to 57.2 as analysts had predicted. (Event C on the chart.)
Michigan Sentiment Index went up from 96.3 in February to 96.9 in March according to the final estimate. That is compared to the preliminary reading of 97.6 and the forecast value of 97.8. (Event D on the chart.) 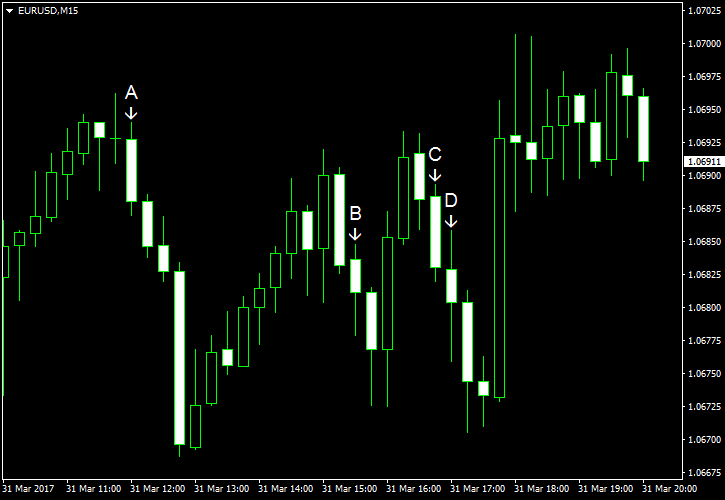