EUR/USD slipped on Monday but bounced by now. Monday’s trading volumes were light as many markets were closed for a holiday. That explains markets’ muted reaction to reports from the United States, which were pretty bad for the most part.
Personal income and spending missed market expectations in March. Income rose 0.2% instead of 0.4% predicted by analysts. Spending showed no change while forecasters promised an increase by 0.2%. Furthermore, both indicators received a downward revisions of their February readings: from an increase by 0.4% to 0.3% for income, and from a gain by 0.1% to 0.0% (no change) for spending. (Event A on the chart.)
Markit manufacturing PMI fell from 53.3. in March to 52.8 in April according to the final estimate. That was in line with the preliminary estimate and analysts’ forecasts. (Event B on the chart.)
ISM manufacturing PMI dropped from 57.2% in March to 54.8% in April, falling below the median forecast of 56.6%. (Event C on the chart.)
Construction spending fell 0.2% in March from February, frustrating those traders who were counting on a growth by 0.5%. On a more positive note, the February reading got a big upward revision from a 0.8% growth to 1.8%. (Event C on the chart.) 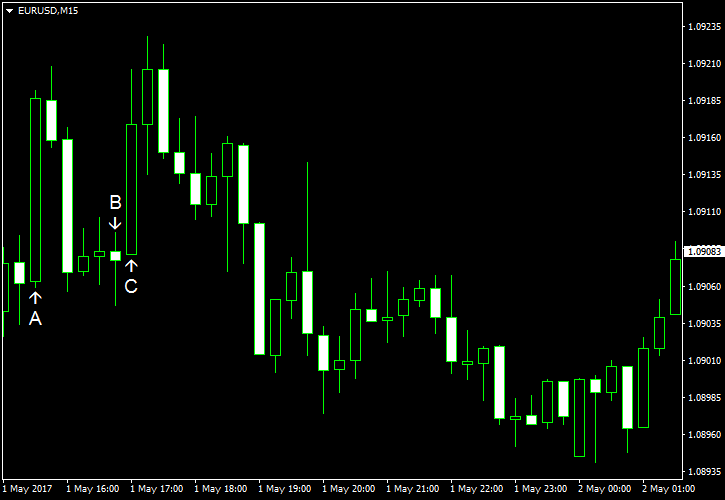