US nonfarm payrolls released during the current trading session were rather good, but that did not prevent EUR/USD from climbing after the release. As a result, the currency pair rebounded after the intraday decline, heading to close just above the opening level. Market analysts speculate that traders paid more attention to the upcoming second round of the French Presidential election this weekend. With polls showing high probability of a victory by  centrist Emmanuel Macron, the euro had an edge on other currencies.
Nonfarm payrolls climbed by 211k in April, exceeding market participants’ average expectation of 194k. On a less positive note, the previous month’s pathetic reading of 98k was revised to even worse 79k. Unemployment rate dropped from 4.5% to 4.4% instead of rising to 4.6% as analysts had predicted. Average hourly earnings rose by 0.3%, matching predictions, while the March increase was revised from 0.2% down to 0.1%. (Event A on the chart.)
Consumer credit rose by $16.4 billion in March from February, exceeding the consensus forecast of $15.0 billion. The February increase was revised from $15.2 billion to $13.8 billion. (Event B on the chart.) 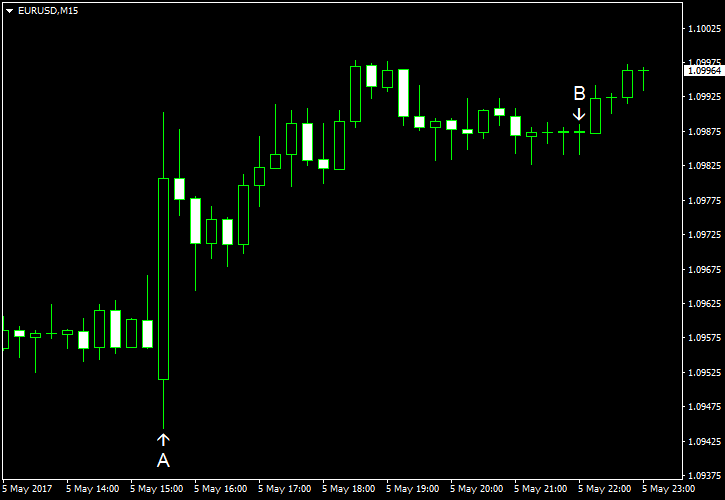