EUR/USD rallied today but has lost gains by now. The currency pair was unable to hold onto gains even though the dollar was under pressure from the shocking news: US President Donald Trump fired FBI Director Comey. The decision was surprising, shocking, and even somewhat suspicious, considering that Comey was investigating the alleged involvement of Russia into the US Presidential election and the Trump’s victory. The dollar slumped on the news, but was able to recover against most of its major rivals, including the euro.
PPI rose 0.5% in April, more than analysts had predicted (0.2%). Moreover, the March change was revised from -0.2% to +0.1%. (Event A on the chart.)
Crude oil inventories dropped by 5.2 million barrels last week. That is compared to the predicted decline by 2.0 million and the previous week’s drop by 0.9 million. The stockpiles were in the upper half of the average range for this time of year. Total motor gasoline inventories were down by 0.2 million barrels but were above the upper limit of the average range. (Event B on the chart.)
Treasury budget turned from the deficit of $176.2 billion in March to the surplus of $182.4 billion in April. Forecasters predict a bit more modest excess of $175.0 billion. (Event C on the chart.) 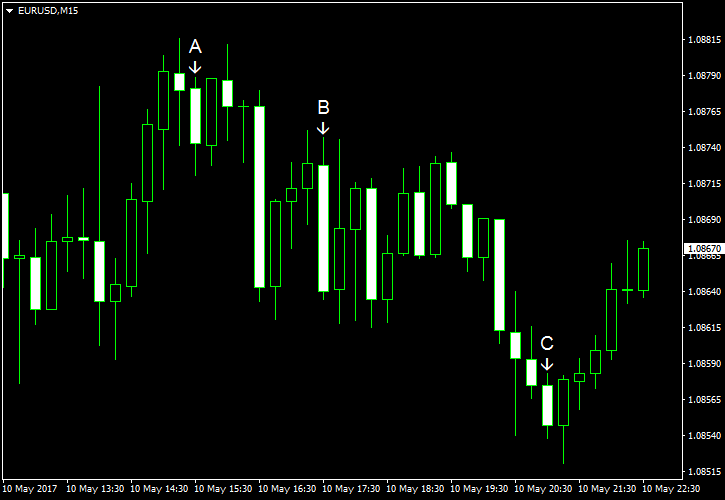