EUR/USD at Highest Since November

EUR/USD rallied today, jumping to the highest level since November. There were plenty of reasons for the rally. Allegations of US President Donald Trump revealing intelligence secrets to Russia caused worries and hurt the appeal of the dollar. US housing data failed to meet expectations, damaging the currency further. Meanwhile, both economic and political news from eurozone were favorable to the euro. EUR/USD halted its rally, though, after US industrial production and capacity utilization managed to beat forecasts.
Both housing starts and building permits missed analysts’ estimates in April. Housing starts were at the seasonally adjusted annual rate of 1.17 million, compared to the median estimate of 1.26 million. Building permits were at the seasonally adjusted annual rate of 1.23 million, below the analysts’ predictions of 1.27 million. In March, the indicators were at 1.20 million and 1.27 million respectively. (Event A on the chart.)
Industrial production and capacity utilization, on the other hand, managed to beat expectations. Industrial production was up 1.0% in April, more than analysts had predicted (the same 0.4% growth as the revised March reading). Capacity utilization increased from 76.1% to 76.7%, whereas experts were counting on just a marginal increase to 76.3%. (Event B on the chart.) 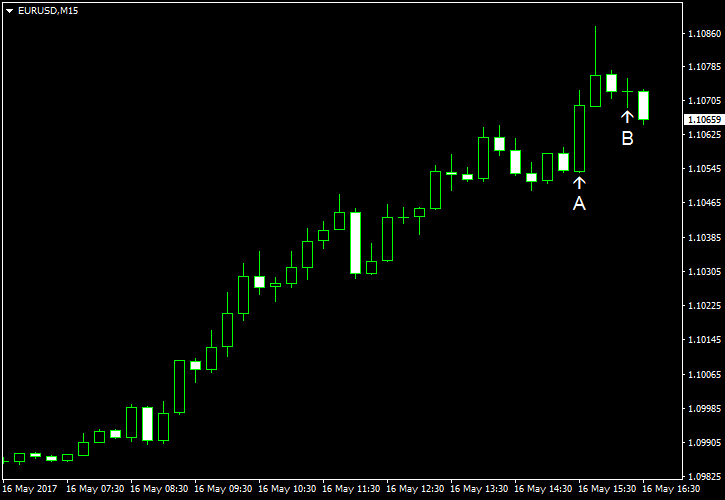