Today, the Federal Open Market Committee released minutes of its latest policy meeting. While the notes were relatively upbeat, hinting at a possibility of an interest rate hike in June, EUR/USD moved up, rather than down. It seems markets considered the minutes to be not as hawkish as dollar bulls were hoping for. The weakness that the US housing market was demonstrating in the recent reports was also helping the currency pair.
Existing home sales dropped to the seasonally adjusted annual rate of 5.57 million in April from the downwardly revised 5.70 million in March. The reading was below the median forecast level of 5.65 million. (Event A on the chart.)
Crude oil inventories dropped by 4.4 million barrels last week. While the drop was bigger than a decrease by 2.4 million predicted by analysts and the previous week’s decline by 1.8 million, the stockpiles remained in the upper half of the average range for this time of year. Total motor gasoline inventories decreased by 0.8 million barrels but were near the upper limit of the average range. (Event B on the chart.)
FOMC released minutes of its May meeting, signaling that another rate hike may happen rather soon (event C on the chart):

Most participants judged that if economic information came in about in line with their expectations, it would soon be appropriate for the Committee to take another step in removing some policy accommodation.

Yesterday, several reports were released (not shown on the chart):
Flash Markit manufacturing PMI dropped from 52.8 to 52.5 in May. Flash Markit services PMI rose from 53.1 to 54.0. That is compared to the analysts’ estimates of 53.2 and 53.3 for manufacturing and services respectively.
Richmond Fed manufacturing index tanked from 20 to 1 in May instead of dropping to 15 as experts had predicted.
New home sales were down to the seasonally adjusted annual rate of 569k in April from the March’s upwardly revised reading of 642k. The actual value was worse than 611k promised by forecasters. 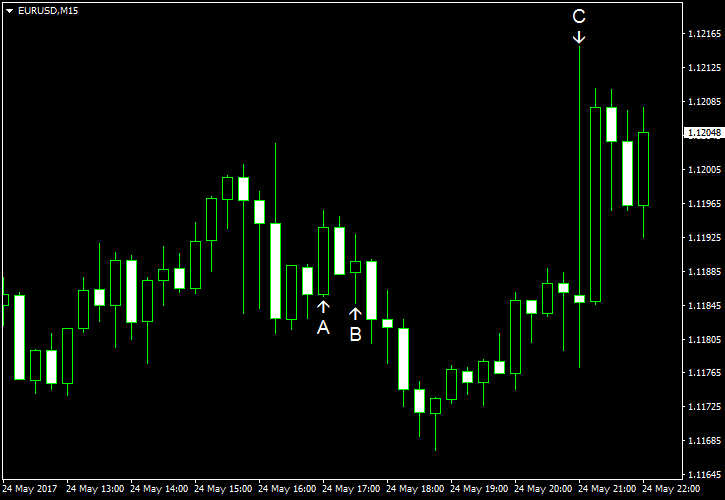