EUR/USD Extends Move Down Following Positive Revision of US GDP

EUR/USD was falling today and extended its decline following the upward revision of US gross domestic product. While the currency pair halted the drop for now, it is too early to tell whether that was just a  or a more significant bounce.
US GDP rose 1.2% in Q1 2017 according to the second (preliminary) estimate. It was a better reading than 0.9% predicted by analysts and 0.7% showed by the advance estimate. Still, it was a slowdown from the growth of 2.1% in Q4 2016. (Event A on the chart.)
Durable goods orders fell 0.7% in April. While it was a worse reading than an increase by 0.9% registered in March, the result was still better than a drop by 1.4% promised by forecasters. (Event A on the chart.)
Michigan Sentiment Index was at 97.1 in May according to the revised estimate, almost unchanged from April’s 97.0. That is compared to the specialists’ prediction of 97.6 and the preliminary figure of 97.7. (Event B on the chart.)
Yesterday, a report on initial jobless claims was released, showing an minor increase from 233k to 234k last week (seasonally adjusted), compared to the average forecast of 238k. (Not shown on the chart.) 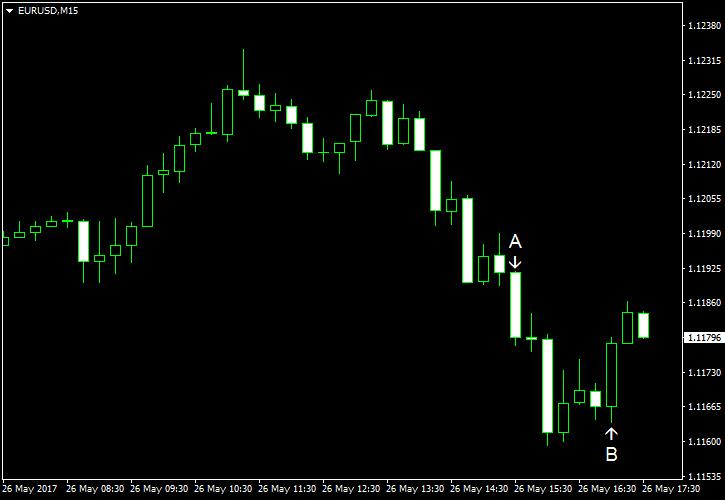