EUR/USD gained today, reversing yesterday’s losses, as almost all economic reports released from the United States during the current trading session were bad. In particular, inflation, closely watched by the Federal Reserve, missed expectations.
CPI was unchanged in June while economists were counting on at least 0.1% increase. The index was down 0.1% in May. (Event A on the chart.)
Retail sales declined 0.2% in June even though analysts also predicted a 0.1% increase. The May’s decline was revised from 0.3% to 0.1%. (Event A on the chart.)
Industrial production and capacity utilization rose in June. Industrial production increased 0.4%, rising for the fifth consecutive month. That is compared to the predicted increase of 0.3% and the previous month’s revised growth of 0.1%. Capacity utilization was at 76.6%, close to the forecast level of 76.7%, up from the downwardly revised 76.4% in May. (Event B on the chart.)
Michigan Sentiment Index fell from 95.1 in June to 93.1 in July according to the preliminary reading. Forecasters had predicted the index to stay unchanged. (Event C on the chart.)
Business inventories expanded by 0.3% in May, exactly as was predicted. The stockpiles declined 0.2% in April. (Event C on the chart.) 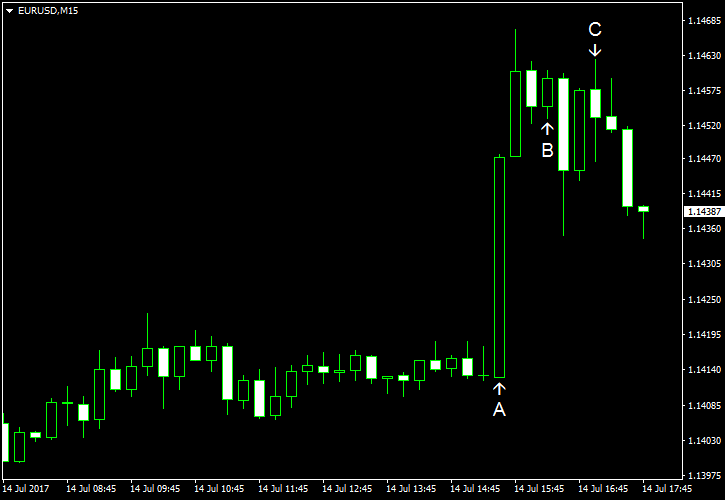