EUR/USD Jumps to Highest Since 2015 After FOMC

EUR/USD rallied today, jumping to the highest level since January 2015, after the Federal Open Market Committee concluded its meeting. The Committee did not deliver any big surprise, and market participants felt that the policy statement was not hawkish enough for the dollar to reverse its bearish momentum.
New home sales were at the seasonally adjusted annual rate of 610k in June, below the median forecast of 615k. The May reading was revised from 610k to 605k. (Event A on the chart.)
US crude oil inventories shrank by 7.2 million barrels last week but remained in the upper half of the average range for this time of year. The drop was bigger than 3.3 million estimated by specialists and the previous week’s drop by 4.7 million. Total motor gasoline inventories decreased by 1.0 million barrels last week though also were in the upper half of the average range. (Event B on the chart.)
FOMC left its federal funds rate in the range of 1%-1.25% as everyone had expected. The Committee stated that it is going to unwind its massive balance sheet soon. Yet despite that and the claim that “ risks to the economic outlook appear roughly balanced,” FOMC voiced concern about sluggish inflation. (Event C on the chart.) 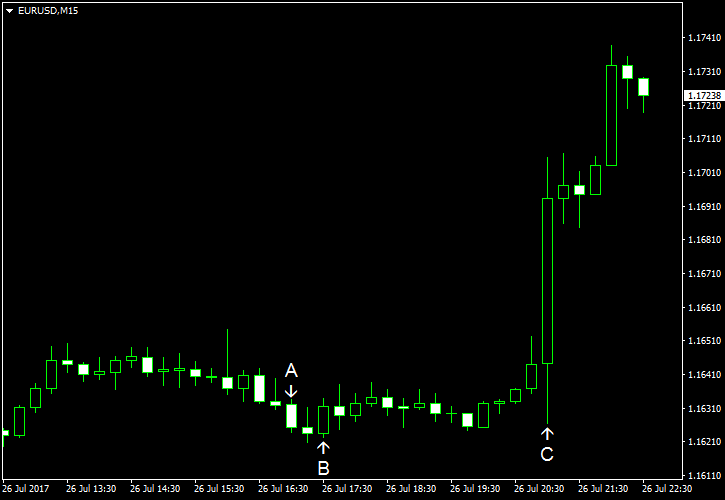