EUR/USD Recovers Despite Good US Data

After having fallen upon the release of the first batch of the US macroeconomic indicators, EUR/USD was rather quick to recover despite the lack of some meaning fundamental drivers. The currency pair then stalled not too far from the daily open level.
US export and import prices rose by 0.4% and 0.1% respectively in July. The growth of the export prices exceeded the median forecast while the import prices changed according to it. A month earlier, both price indices fell by 0.2%. (Event A on the chart.)
NY Empire State Index accelerated from 9.8 to 25.2 in August. It was a far better reading than the 10.0 value, which the market participants had expected. This month’s level is the highest in almost 3 years for this manufacturing business activity measure. (Event A on the chart.)
Retail sales grew by 0.6% at a seasonally adjusted rate in the month of July in the United States. It surpassed the 0.3% increase forecast. What is more, the previous month’s decline of 0.2% was revised to the 0.3% gain. Core retail sales have also shown a decent growth — 0.5% vs. 0.4% forecast. (Event A on the chart.)
Business inventories rose by 0.5% in June, faster than forecast (0.4%) and faster than in May (0.3%). (Event B on the chart.)
Net foreign purchases of the  US securities were at $34.4 billion in June compared to the forecast value of $28.3 billion. They were at $91.9 billion in May. (Event C on the chart.)
On Friday, the CPI report for July has shown a 0.1% growth of both the main index and its core version. Both were expected to rise by 0.2%. June numbers were 0% change for the index, and 0.1% increase for the core component. (Not shown on the chart.) 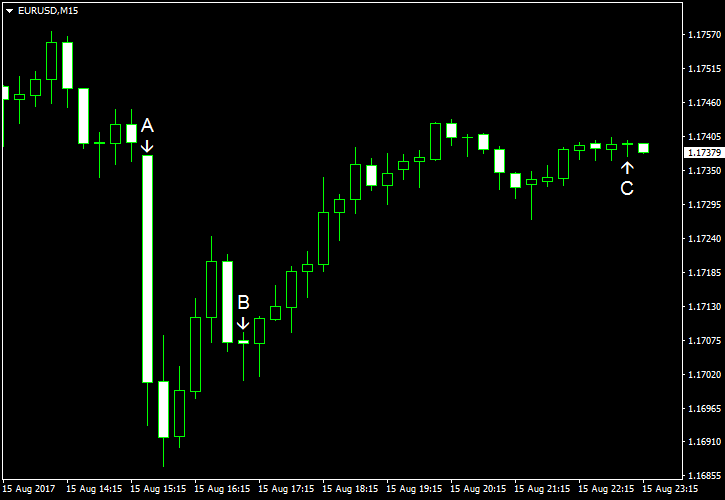