EUR/USD Falls Before US Data, Soars on FOMC Minutes

EUR/USD had fallen today even before any meaningful economic data was released anywhere in Europe or the United States. It continued to fall even as the US reports came out without any good surprises for the dollar bulls. However, the currency pair rallied later following the release of the July FOMC meeting minutes.
Both housing starts and building permits deteriorated in July, falling to 1.16 and 1.22 million units respectively (annualized, seasonally adjusted basis). The numbers were at 1.21 and 1.28 million last month. Forecasts have been also more optimistic for these real estate market metric — 1.22 and 1.25 million respectively. (Event A on the chart.)
Crude oil inventories decreased by 8.9 million barrels last week. The drop followed 6.5 million barrels decline a week earlier. The median forecast was for a less harsh drop — 3.4 million barrels. The inventories are in the upper half of the average range for this time of year. Total motor gasoline inventories did not change during the same period. (Event B on the chart.)
FOMC published the minutes of its July meeting today. In them, the Committee’s members reiterated their concern about the inflation. (Event C on the chart.) It does not look that they will be able to come to a rate hike decision this year:

Inflation on a 12âmonth basis was expected to remain somewhat below 2 percent in the near term but to stabilize around the Committee’s 2 percent objective over the medium term. Members saw the  risks to the economic outlook as roughly balanced, but, in light of their concern about the recent slowing in inflation, they agreed to continue to monitor inflation developments closely. 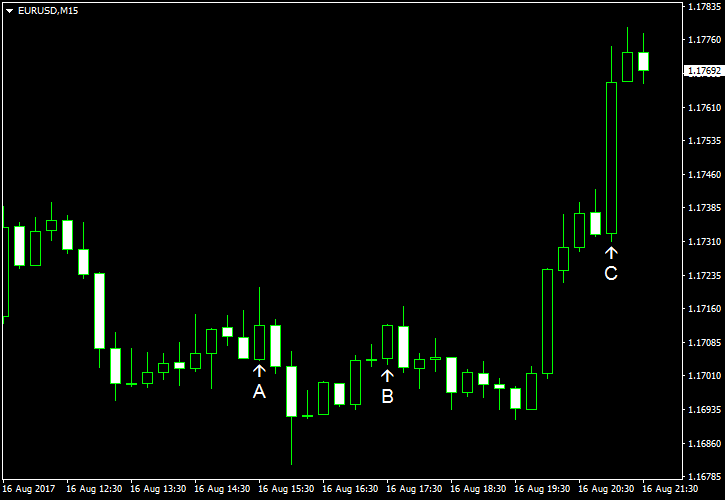