EUR/USD Unable to Rally on Back of Poor US NFP

EUR/USD attempted to rally after the poor nonfarm payrolls released today but quickly reversed its movement following the  spike to the upside. The currency pair accelerated its move down after the positive US services report. As with the manufacturing data, reports from Markit and ISM contradicted each other to some degree as one showed an increase of the indicator, while the other a decrease (though both showed expansion of the sector). This time, though, it was the ISM report that showed a better result.
Nonfarm payrolls rose by 261k in October, failing to meet the average forecast of 312k. The previous month’s reading was revised from a drop by 33k to a gain of 18k. Unemployment rate dropped unexpectedly from 4.2% to 4.1%. Average weekly earnings were little changed in October following the increase by 0.5% in September, while analysts had predicted a gain by 0.2%. (Event A on the chart.)
Trade balance deficit rose from $42.8 billion in August to $43.5 billion in September. It was close to the forecast value of $43.3 billion. (Event A on the chart.)
Markit services PMI was at 55.3 in October, unchanged from September, according to the final estimate. That is compared to the average forecast of 55.7 and the preliminary estimate of 55.9. (Event B on the chart.)
ISM manufacturing PMI edged up from 59.8% in September to 60.1% in October instead of falling to 58.5% as analysts had predicted. (Event C on the chart.)
Factory orders rose 1.4% in September, demonstrating faster growth than 1.3% predicted by analysts and 1.2% registered in August. (Event C on the chart.) 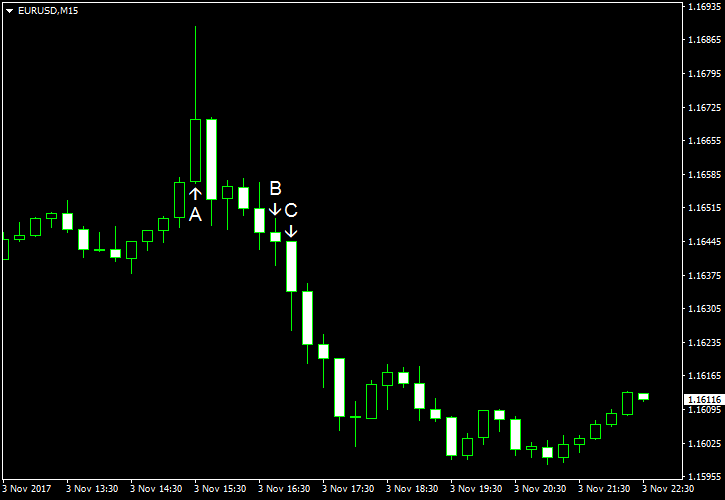