EUR/USD settled little changed on Wednesday (though it attempted to rally intraday) despite the large amount of economic reports in the United States. One of the most important of them was the inflation data, which showed that headline inflation slowed last month. Yet underline inflation accelerated a bit from 0.1% to 0.2%. Overall, economic data was mixed, giving no edge to the currency pair.
CPI rose 0.1% in October on a seasonally adjusted basis, matching forecasts exactly. The index rose 0.5% in September. (Event A on the chart.)
Retail sales increased by 0.2% in October, whereas analysts had promised no change. Furthermore, the previous month’s increase was revised from 1.6% to 1.9%. (Event A on the chart.)
NY Empire State Index dropped from 30.2 to 19.4 in November, missing the consensus forecast of 25.5. Still, the report was fairly optimistic, saying that “business activity continued to grow strongly in New York State.” (Event A on the chart.)
Business inventories were virtually unchanged in September from August, matching expectations. The August increase was revised from 0.7% down to 0.6%. (Event B on the chart.)
Crude oil inventories rose by 1.9 million barrels last week instead of falling by 2.1 million as analysts had predicted and were in the upper half of the average range for this time of year. The stockpiles were up by 2.2 millions the week before. Total motor gasoline inventories increased by 0.9 million barrels and were in the middle of the average range. (Event C on the chart.)
Net foreign purchases were at $80.9 billion in September, above the median forecast of $34.6 billion. The August value was revised from $67.2 billion to $73.2 billion. (Event D on the chart.)
Yesterday, a report on PPI was released, showing a 0.4% increase in October, the same as in September. The index was up 0.1% in the preceding month. (Not shown on the chart.) 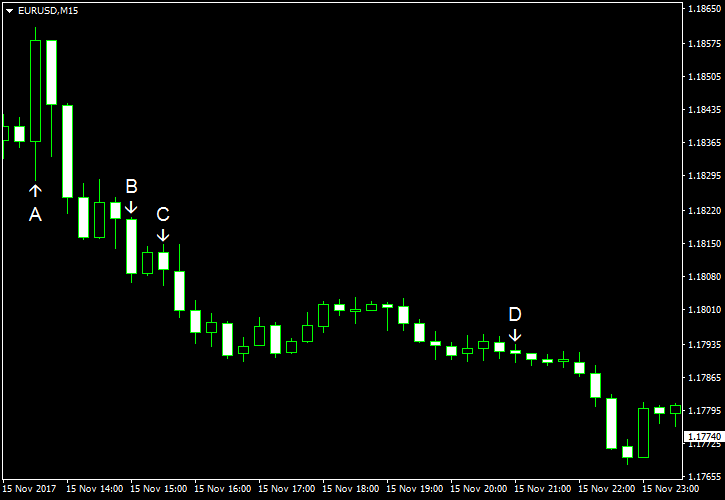