Will Jerome Powell Continue Yellen’s Policy or Start a Revolution?

Jerome Powell was nominated for the position of the US Federal Reserve Chair on November 2. His appointment is still to be approved by the Senate, but there is little doubt that Powell will be the one who takes the most powerful office in the financial industry on February 1.
Trump’s picking Powell raised some eyebrows among analysts because he has no PhD in economics but is a lawyer. However, that might have little to do with his ability to lead the  central bank in the world. After all, he will work alongside the team of experienced Fed board members and will get advice and council from the highly proficient Fed staff.
Looking at Powell’s nomination from the perspective of a Forex trader, we should turn our attention to his recent speeches (in his current role as the Fed Governor). Judging by Jerome Powell’s choice of words, it is not possible to label him either as a strong hawk or a stubborn dove. Nevertheless, his statements contain some clues.
In February this year, his speech on The Economic Outlook and Monetary Policy mentioned that during the period of low interest rates, the Fed should use other monetary policy tools (like QE for example) aggressively if the USA is to deal with another economical downturn:

Research suggests that, as a precautionary matter, policy should be more aggressive in providing accommodation as rates move closer to the ELB.

His June Thoughts on the Normalization of Monetary Policy reminded Fed watchers that the inflation objective is symmetric, and overshooting 2% is as problematic as undershooting it, which hints at his mild hawkishness:

This objective is symmetric, so the Committee would be concerned if inflation were to run persistently above or below this target. Inflation has run below 2 percent for most of the period since the financial crisis, reflecting generally soft economic conditions as well as transitory factors such as the earlier declines in energy prices. 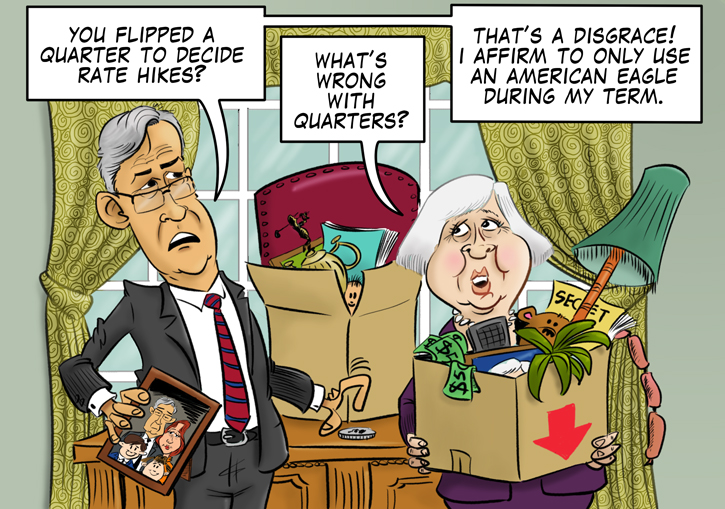 I believe that the Federal Open Market Committee under Jerome Powell will not act in a much different manner than it did under Janet Yellen. Yet if opportunity arises, I would expect the new Chair to raise the fed funds rate at a faster pace and with less hesitation. And what do you think about Powell?

If you want to share a detailed opinion on how Jerome Powell will lead the US Federal Reserve and how would the Fed’s monetary policy evolve under his governance, submit a comment below.