EUR/USD rallied following the release of US durable goods orders today and continued to move up ever since. Not all reports in the United States were bad, but that did not prevent the currency pair from rallying. FOMC minutes did little to stop the rally despite mentioning another interest rate hike in the near future.
Initial jobless claims dropped to 239k last week from the previous week’s revised level of 252k. The median forecast was 241k. (Event A on the chart.)
Durable goods orders fell by 1.2% in October instead of rising by 0.4% as analysts had predicted. The previous month’s increase was revised from 2.2% to 2.0%. (Event A on the chart.)
Michigan Sentiment Index fell from 100.7 in October to 98.5 in November according to the revised reading. That is compared to the preliminary value of 97.8 and the forecast figure of 98.2. (Event B on the chart.)
Crude oil inventories decreased by 1.9 million last week after increasing by the same amount the week before but remained in the upper half of the average range for this time of year. Analysts had predicted a smaller decline by 1.4 million. Total motor gasoline inventories remained unchanged in the middle of the average range. (Event C on the chart.)
FOMC released the minutes of its meeting today. US policy makers expressed a rather optimistic outlook for the economy, though voiced concerns about sluggish inflation. Some argued that it warrants more gradual pace of monetary tightening, while others talked about risks of keeping monetary policy accommodative for too long. Overall, policy makers were expecting another interest rate hike in the near future (event D on the chart):

Consistent with their expectation that a gradual removal of monetary policy accommodation would be appropriate, many participants thought that another increase in the target range for the federal funds rate was likely to be warranted in the near term if incoming information left the  outlook broadly unchanged.

Yesterday, a report on existing home sales was released, showing an increase to the seasonally adjusted annual rate of 5.48 million in October from the downwardly revised 5.37 million in September. That is compared to the average forecast of 5.42 million. (Not shown on the chart.) 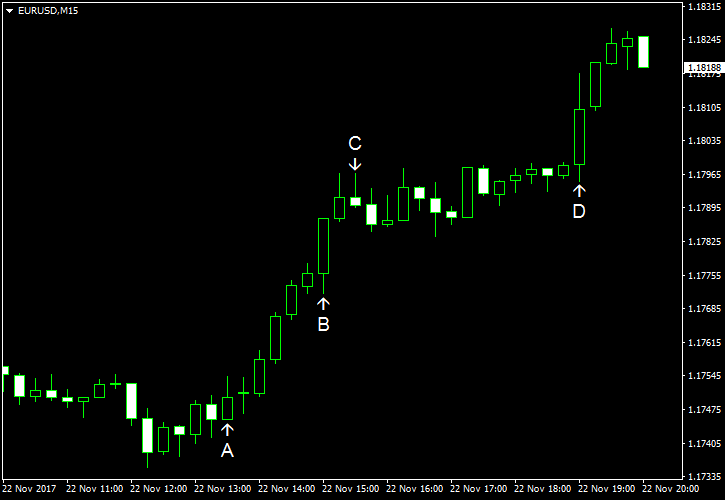